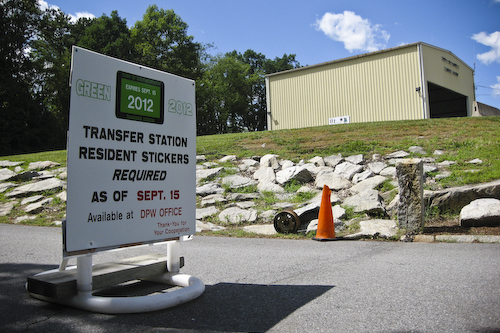 An increase in the cost of a Transfer Station sticker has been an annual event for several years now. Last night Selectmen decided to hold the fee at its current rate of $175, but there was little consensus on the board about how the Transfer Station should operate and be funded in the future.

In a memo to selectmen, DPW Superintendent Karen Galligan said Transfer Station sticker fees cover a portion of the cost to operate the Transfer Station and dispose of the town’s trash, but an additional $150K was taken last year from the tax roll to fully fund the operation. If the town wanted to cover the full cost via permit fees, the price of a sticker would need to be $250, she said.

Funding the Transfer Station solely through sticker fees is exactly the direction Selectman Dan Kolenda said the town should move in. Kolenda proposed raising the cost of a sticker to $210 this year with the goal of reaching $250 next year.

But Chairman John Rooney said while he thinks the Transfer Station should be self-funding, he did not support an increase in the sticker fee, arguing instead the town needs to move to a usage-based model like pay-as-you-throw.

Selectman Boland also opposed an increase, as well as a move to pay-as-you-throw, saying the use of tax dollars to partially fund the Transfer Station is appropriate.

“I think it’s a service that some of your tax money should go to,” Boland said. “We don’t pay per child we have in school, or per time the fire department comes to your house, or per senior citizen that goes to the Senior Center.”

So, we have one selectman who wants to fund the Transfer Station solely through permit fees, one who wants to move to pay-as-you-throw, and one who is just fine with the way things are. See what I mean about little consensus?

In the end, the board voted 2-1 to keep the price of a Transfer Station sticker at $175. Rooney joined Boland in the yes vote (albeit “reluctantly,” he said), while Kolenda voted no. (The vote also changed some Transfer Station policies and associated fees. I’ll detail those in an upcoming post.)

But Rooney wasn’t content to let the issue stand where it is. Saying the town needs “to act with fiscal responsibility,” Rooney asked Galligan to draft a proposal for a pay-as-you-throw system. He also asked her to look into doing away with the Transfer Station entirely and instead having residents use private haulers.

“If it makes fiscal sense, I will once again push the board to adopt it,” Rooney said of pay-as-you-throw, which he lobbied hard for last year. “But I assume I will be outvoted as in the past. Correct?”

Kolenda and Boland answered in unison with a resounding “yes.”

Pay as you throw? Only if you make the bagging process inexpensive and durable. Thin plastic ones other towns use would not stand up to what comes out of our diaper pail!

Crack down on commercial dumpers? YES!!!
When is this going to happen? We can buy cameras and pay for installation and wiring so people don’t loiter but still no action on the unlimited commercial dumping that goes on. Sure they have a town sticker on their pickup but how many trips a day from the site do they make and still only have to pay $175. UNFAIR! Charge them $300 each and see where we are in a year with support from taxes.

Private Haulers? NO!
There are already enough trash trucks driving way over the speed limit at 6 AM we don’t need more. The smell, the squeeling brakes, the unsightly mess on the side of the road on trash day.

Matthew – the DPW added some new restrictions around commercial vehicles to the rules and regs that were approved last night. I’ll have more details in a post (hopefully) tomorrow. Stay tuned!

Actually a town contracted and subsidized private hauler would solve most of your complaints. This way there would only be one truck on one day since everyone would have the same hauler. They would be stopping at every house, so no speeding and the town can contract their start time. Lastly it would solve the contractors getting a free ride since they can’t put a dumpsters worth of trash on their curb.

As an aside, Tolland, CT seems to have the same demographic as we do here in Southborough. They have private haulers deal with their trash, they have a beautiful recreation area complete with swimming, tennis, picnic area, playground, etc. and seem to offer many other things for their residents…and their taxes seem to be in line with what ours are. I wonder if anyone has ever considered that we should look into other towns to see how their budgets work and what is offered to their residents, as well as employees, and do a comparison of how we handle our tax dollars. I am not saying we are doing anything wrong, I just see other towns with more available for their residents and wonder how they manage to provide those extras for all to enjoy. I’m just sayin’…..

I live on a main street fairly close to a neighboring town and I have had many bags of trash thrown onto the wooded area of my property. I have no choice but to gather them up and bring them to the dump. Mr. Rooney has said in the past that he thinks public dumping isn’t a problem, based on reported data. My personal experience is otherwise. Just wait til we have pay-as-you-throw. Be careful what you wish for.