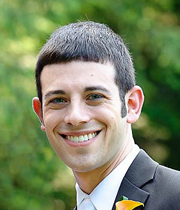 One former resident’s Southborough education will be put to the test this week. Southborough native Matt Samberg will compete on “Jeopardy!” on Friday night.

Matt, 28, an attorney who now lives in Pittsburg with his wife Diana, is an avid “Jeopardy!” fan. He took the show’s online test multiple times before being invited to New York for an interview. “He really wanted to get on,” mom Eileen said.

Matt grew up in Southborough, went to the public schools, and graduated from Algonquin. Eileen said her son has always had a knack for facts. He won the geography bee twice in middle school and went on to compete at the state level.

Let’s hope he has all the facts at his disposal on Friday night. The show airs at 7:30 pm on WBZ (Channel 4). Tune in and cheer on a hometown boy!

Matt won! So tune in on Monday.

If you missed Matt tonight, you can catch him on Monday.