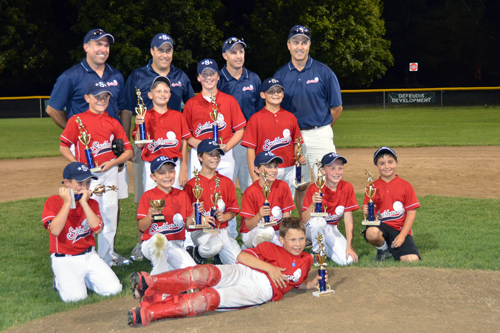 From the reports coming in, Southborough Youth Baseball had a successful summer season. The 11-year-olds went undefeated, the 10-year-olds capped their season with a tournament win, and now we hear the 9-year-olds pulled out all the stops to end their season on a high note.

Here’s the recap sent in by Coach Matt Gattuso:

The Southborough Youth Baseball’s nine-year old District team, completed their summer journey Thursday evening with a 4-3 Championship victory against gritty rival, Grafton, in the Northboro Invitational Tournament. The boys were undefeated in the Northboro tournament, which included 14 teams, scoring 58 total runs on offense while holding their competitors to just 21 on defense throughout the event. Every member of the Southborough team contributed to the victories with each player having had an opportunity to pitch during the team’s impressive tournament performance.

In the championship game, Brady Martin delivered a stellar pitching performance and left the mound with a 4-3 lead. Lefty pitcher Kevin Henderson shut down Grafton’s potent offense the rest of the way with help from a sixth inning, rally-killing double-play started by Jake LaMalva’s highlight reel running catch in right field. Henderson secured the victory by striking out the final batter with the tying run on base.

Congratulations to all of the players as the Championship is truly a reflection of the contributions made by all of them!/