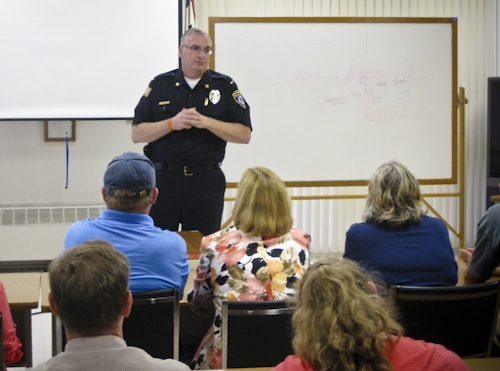 Late yesterday afternoon I had a knock on my door. The clean-cut young man standing on the other side said he had recently graduated from college and had started a window cleaning business. I politely told him I wasn’t interested and closed the door. It never occurred to me that something might have been amiss, but Lt. Sean James of the Southborough Police Department told me the visit might not have been what it seemed.

Over the past month, Southborough has seen six home break-ins. James told a group of about 50 residents at a community meeting last night, the suspects are targeting homes when they know the residents aren’t there.

Police believe the criminals knock on the front door of a home. If someone answers, they pretend to be solicitors. If no one answers, they make their way around the side and back of the home looking for a way in. They may kick in a door, or break a window. Once inside they move quickly and are gone in a matter of minutes, James said.

Detective Sean McCarthy said they believe most of the break-ins are drug-related, committed by people who are stealing items to feed their habit. Chief Jane Moran said Southborough’s location along major commuter routes like Route 9 and Route 495 make it more attractive to these types of criminals.

Moran said she believes having more officers on the street would help prevent break-ins, but acknowledged it’s a hard case to make to taxpayers. “You can’t prove prevention,” she said.

I don’t know whether the young man who stopped by my home yesterday was a legitimate solicitor or not, but police said the most important thing is to call police if there’s anything suspicious. “The Southborough Police Department is open 365 days a year, 7 days a week, 24 hours a day,” James said.

Here are some more tips police shared to keep your home and property safe.

For those of you who were at the meeting, did I miss any tips? What were your impressions? Did you walk away feeling better or more freaked out? Share your thoughts in the comments below.

Presumably as the young man in question in the beginning of this article, I graduated from Connecticut College in May and started a window cleaning business, I wanted to take this chance to defend myself. The homeowner whose windows I was cleaning today showed me this article and I have several references available in Southborough. Before I started soliciting in Southborough, I registered as a solicitor and the police have a copy of my license and vehicle registration (a silver F-150). If I come to your door, ask for my business card which contains my home address and personal cell phone number. While I urge you to be cautious, please don’t write me off as a criminal just because I come knocking at your door. In addition, my colleague is not an unknown person who I had an interview with and hired, but my classmate and college roommate.
If you are unsure, call the police station and you can have my information. As a Bolton resident I am a registered business with the Town of Bolton and with the IRS. If you want to check my insurance, I can have my insurance agency send you my insurance certificate. I am not a drug-fueled home invader, just a young entrepreneur trying to make an honest living in a tough job market.
Thanks,
-Alex Jong

Glad to hear my fears were unfounded. I appreciate you sharing the information and setting the record straight. Best of luck to you.