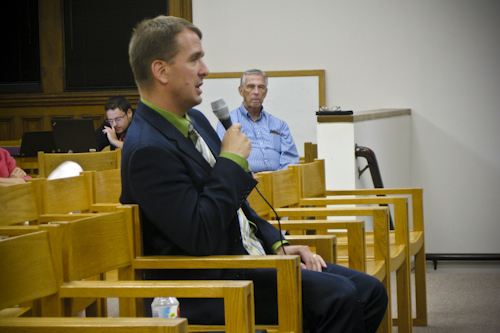 Above: Ashland Interim Town Administrator Mark Purple speaking to the Board of Selectmen on Monday

“The decision is so important that we really need to get it right,” Chairman John Rooney said as the meeting began. For all three selectmen the right choice was Purple.

“I truly believe he’s the person who will bring us forward,” Selectman Bill Boland said.

Rooney pointed to Purple’s experience in municipal administration as being key to his decision. Purple has been the assistant town administrator in Ashland since 2006. Prior that he was an assistant town manager in Framingham.

Rooney also commended Purple’s leadership style. “He convinced me one of the most important skills needed as a leader is to listen,” Rooney said.

Calling him “very impressive,” Selectman Dan Kolenda said Southborough could benefit from Purple’s experience implementing costs savings in the communities in which he has served. He also said he was swayed by the fact that Purple began his early career working as a truck driver and laborer.

“I think that experience is so important,” Kolenda said.

While they were unanimous in their top pick, selectmen said all three finalists for the position were well qualified. Purple, along with fellow finalists West Boylston Town Administrator Leon Gaumond Jr. and Lincoln Assistant Town Administrator Anita Scheipers, was interviewed by the board on Monday night.

“I’m very impressed with the quality of the three candidates,” Boland said. “I do not think there is a bad choice.”

Rooney said hiring a strong town administrator like Purple will allow the Board of Selectmen to focus on “bigger issues and community goals,” instead of being mired in the day-to-day operations of the town.

The Board authorized Rooney to begin negotiations with Purple on a contract immediately.

Congratulations to the screening committee, the Board of Selectmen, and especially to our new town administrator. Welcome, Mark!