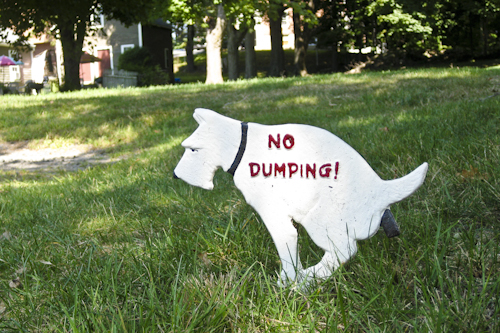 Above: This sign on a Main Street lawn says it all

We’ve talked about a wide range of topics here on My Southborough, but I don’t believe dog poop has ever been among them. That all changes today.

Earlier this year, a contractor hired to clean out storm drains around town made a most unwelcome discovery: bags of dog feces had been dumped down several drains. The waste, found in three catch basins on Overlook Drive, was wrapped in blue plastic bags, Public Health Director Paul Pisinski told the Board of Health earlier this week.

Pisinski told the Board of Health town bylaw prohibits dumping of pollutants or any “non-stormwater discharge” into catch basins. Violations are punishable by fines, civil action, or even criminal prosecution, according to the bylaw.

In this case, Pisinski said they would start with a letter to residents on Overlook to let them know about the bylaw and to encourage them to dispose of dog waste appropriately.

“It’s commendable that they’re picking up the waste,” Pisinski said. “But a catch basin is not a receptacle for that purpose.”

Board of Health Chairman Louis Fazen III agreed, saying the board wants to encourage dog owners to pick up after their pets because waste left on the ground eventually makes its way into catch basins and the water system, as well.

So what is the best way to dispose of dog waste? Pisinski says double-bag it, and bring it to the Transfer Station.

The transfer station guidelines state the biological waste is prohibited, I do dump our dog’s poop into the hopper anyway, but I do it discreetly. ;-) It even specifically calls out human waste, which I’m sure there are zero diapers going in there. Stupid rules annoy me.

Not that I’m defending dumping dog poop bags into the storm drains, the drains need to remain clear for proper drainage, but the poop contamination isn’t much of a reason. Many of us have septic tanks and all that waste eventually makes it’s way to these same places anyway.

I generally dump the soapy water when I wash my car into the storm drain, I hope they don’t jail me.

Dear SB Resident
Storm drains must not be treated like sewers. Storm drains go directly into the nearest river. Much of the pollution of our rivers actually is caused by run-off; fertilizers, pesticides, herbicides, dog poop and the soapy water that some will dump into the storm drains. Our rivers here in Massachusetts are not the cesspools they were many years ago when factories and sewers dumped waste freely. We like our rivers clean. I too hope you don’t get jailed! Rather, I hope you give it some thought and decide to do the right thing.

I’m sure the person was just unaware. Hopefully there won’t be anymore findings and we don’t have to make a big deal out of nothing.

Love the picture. There hasn’t been any “dumping” in my yard since it went up!

I cannot wash my car anymore? Is there a biodegradable soap that would be OK to use? Where does the soapy water go for the car wash in town? Can teenagers still raise money by having a car wash at the Transfer Station? Hold on, that might be a positive.

When did dog poop become a biohazard? Have the dear, coyotes, raccoons, squirrels, fisher cats, opossums, and other wild animals been read their rights? “You have the right to poop in the woods. If you poop near storm drain or a river, you can be removed from the town.”

There maybe another use for that sign during the political season. Just might have to get one.

Not sure if this is best, but I pick up my dog’s output and fling it into wooded areas where it can decompose at nature’s rate without contaminating the water supply. Let the beetles have it.

Is the storm drain issue (strangely) more about the bags? Since they won’t break down.

“Many of us have septic tanks and all that waste eventually makes it’s way to these same places anyway.”

This is a completely untrue statement. Do people out there actually believe that our septic systems release human waste into waterways or groundwater systems???Septic systems are designed for the very purpose of filtering and sanitizing waste so that none enters waterways. Effluent is filtered and microfitered and exposed to benefitial organisms which break it down to such an extent that what results is nearly clean enough to drink when it enters the groundwater.

The point is, if all our human waste is essentially being put into the ground, surely some “non-stormwater discharge” into our catch basins can’t be much of a problem as our town bylaw suggests it is. If it is such a serious issue, it sounds like a pretty big design error to me. Again, I’m not at all defending dumping filled plastic bags into storm drains, just trying to discredit the Board of Health Chairman’s statements and the extreme town bylaw.

There is a very big difference between the two. When you deal with waste appropriately, it has a relatively small impact on the environment.

A septic tank holds the waste, and it ends up sanitized and contained. Much of the waste ends up either remediated through that environment, and the majority of the solid waste is pumped out. (If it isn’t pumped out, your septic system will overflow). What does come out into the local ground isn’t really comparable to what gets input into the system in raw form. Additionally, there is a huge difference in impact between waste that is gradually introduced to the environment through slow seepage into the ground, which can perform a lot of natural filtering and decomposition, compared to ‘raw’ waste that is quickly dumped directly into a river (through stormdrains).

Exactly Local. Sorry SBResident, but you are still mistaken. I know it is really easy to NOT think of where waste goes when you flush a toilet, but it does not go into the ground as you suggest. People mistakenly thinking so may cause problems and exactly the kind of behavior this post is talking about. Solids are contained for later (safe) removal and effluent (the liquid which is left) is highly filtered before it is allowed to enter the groundwater. No amount of raw sewage is okay to dump inappropriately. Dog owners should look into a very simple and relatively inexpensive dog waste system. You install it in the ground in your yard and “charge” it with microorganisms. When you dispose of pet waste in the can it acts just like a mini septic system and breaks down the waste safely. They cost about $40.00.

I know exactly how my septic tank works. Most of the waste does go straight into the ground. The leach fields entire purpose is to do the ‘filtering’ and the leach field *is* the ground.

The Board of Health Chairman’s statement was “waste left on the ground eventually makes its way into catch basins and the water system.” I’m still arguing the tiny amount of waste that runs off from dog poop on the ground into the storm drains is so small it will effectively clean itself just like my septic system does. It also seems pretty stupid that we as a society dump our run off straight into rivers etc. without dumping it into a leech field type system. This is mostly likely because we know that our contaminates are dilute enough. Anyway, I will confidently continue to not pick my dog’s poop up when it’s not in someone’s else lawn and not near a place where people may walk.

Mr Crowell is definitely correct that the community car washes are illegal.

Lastly, I feel sad for anyone with public water in MA who worries about wasting it. If consumption is ruining our world, wasting water should be at the bottom of the list of things to worry about.

According the Metrowest Daily, a beaver on the boarder with Ashland did not get the notice and he will soon “not be down for breakfast.”

I still think those car wash fundraisers are no longer legal unless there is some special soap that passes EPA standards for storm drains. The soap probably will not clean anything, but hey, we passed this law.

I hope that car wash fundraisers are illegal. Along with sending soap into wet land areas, they waste tons of water. I have posted on this very issue before. It is smarter and much more environmentally friendly to reach an agreement with a local car wash that has all the state appoved filters and such in place and hold the fund raiser there.

“Massachusetts is rich with many water bodies and plentiful rainfall. But as our demand for water increases with growth, and our infrastructure ages, some of our streams and lakes have become stressed and we are facing water supply shortages. Today, the need to use our water efficiently with minimal amount of waste is critical to the long-term health and viability of these important resources.

Massachusetts first published water conservation guidelines in 1987. Since then, technological advancements have greatly helped improve the efficiency of water use. Additionally, our understanding of the impacts of human water use on the natural environment has increased. The current Water Conservation Standards continue to establish updated statewide goals for water conservation and water-use efficiency and provide guidance on the most current conservation measures. They will help bring greater awareness among users about water use and water waste, help tighten our infrastructure, ensure sustained water supply, and move us forward toward more pragmatic water use.”

I feel sad for anyone in denial about critical environmental issues like the need for water conservation in our communities. They are quite literaly flushing our childrens’ futures down the toilet. Not convinced that there exists a water supply crisis in MA? Spend half an hour speaking with Representative Dykema some time. She has spent a career on the science and facts behind the issue and really knows her stuff.

Why would one choose to waste water or any other natural resource? Concern about such issues is the only responsible course of action.

I fear that this discussion has ceased to be constructive. There’s no arguing with this type of thinking. Thank goodness it is fast becoming the minority.

Must be election season if a dog poop thread turns into another endorsement for a politician. Having this also linked to a “water supply crises” is perfect. As a current politician noted, never fail to take advantage of a crises – or in this case change the subject (see earlier thread on campaign contributions).

At this point, I am getting a dog and digging my own well. Once that is done, I will hear, “you did not dig that well, you do not own that water.” That is when our children’s fate will be sealed.