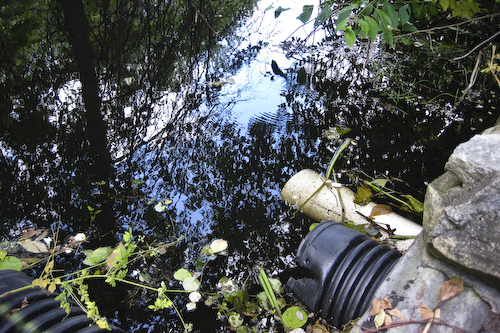 Above: Pipes extend from a culvert on Wood Street that is partially blocked by a beaver dam

Beavers are nothing if not persistent. Last year a family of the critters built a dam inside a culvert under Wood Street. The town trapped the beavers and broke up the dam, but a new family has moved in again this year. That means DPW Superintendent Karen Galligan was back before the Board of Health asking for a permit to trap them.

Galligan told the board last week the blocked culvert is exacerbating the water problem in a neighborhood already prone to flooding. The culvert where the beavers have built a dam leads from wetlands on one side of Wood Street to the Sudbury River on the other.

The blocked culvert raises the level of the groundwater, and that causes a public health issue explained Public Health Director Paul Pisinski.

“Water gets into septic leaching areas, flushing out the effluent before it has a chance to assimilate into the ground,” Pisinski said. “It gets into the Sudbury River, flows downstream, and creates a pollution issue.”

Galligan said in heavy rain, the water can also get high enough that it flows over the road, causing a threat to public safety.

Beavers are a protected species in Massachusetts, and it falls to the local Board of Health to issue emergency trapping permits. Massachusetts, state law prohibits relocating trapped wildlife, so once captured the only option would be to kill the animals.

Citing both public health and public safety concerns, the Board of Health voted unanimously to approve a trapping permit.

Galligan said beavers are a problem all along the Sudbury River because it is so slow-moving, and she acknowledged it’s a hard problem to manage. “Once they get settled in an area, if they’re trapped, another will move in,” she said.