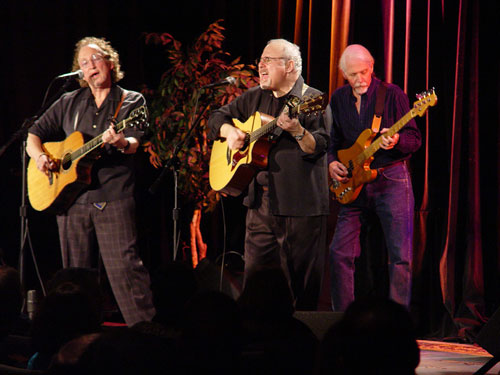 Steeple Coffeehouse, located in Pilgrim Church’s Fellowship Hall, will open its 17th season on Saturday with a special performance by the venerable Aztec Two-Step. It will be the debut performance of the acoustic duo’s 40th Anniversary show. Here are the program notes.

To commemorate their 40th Anniversary year, early 2012 brings the official release of Fowler & Shulman’s studio CD “Cause & Effect” (Red Engine Records). A collection of songs of social significance, it is produced by Paul Guzzone and features long-time bassist Fred Holman. The album is a combination of re-worked previously recorded songs and newly mined material.

From John Platt of WFUV in New York, “The secret of Aztec Two Step’s longevity isn’t just the harmony between Rex and Neal, it’s also the quality of the songs. On “Cause and Effect” they revisit a lot of their repertoire with crisp acoustic arrangements. And while the songs were mostly inspired by a specific moment in time (Reaganomics, apartheid, John Lennon’s assassination), they resonate anew today.”

As in past seasons, Tomasso Trattoria will offer a discounted dinner to those going to the show. Choose one antipasto item to share, 1 pasta to share, and 2 entrees, all from the regular menu for $40 prepaid online when you buy tickets.