In an effort to share all the information that’s coming my way, every Friday from now until the election I’ll be doing a round-up of press releases from local candidates. Here’s the first installment. 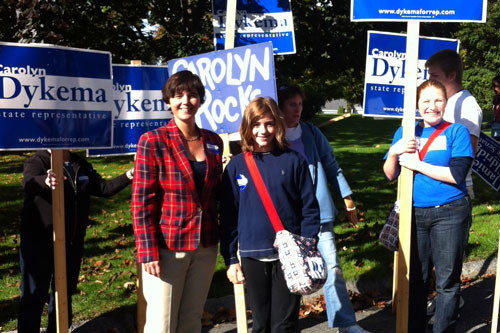 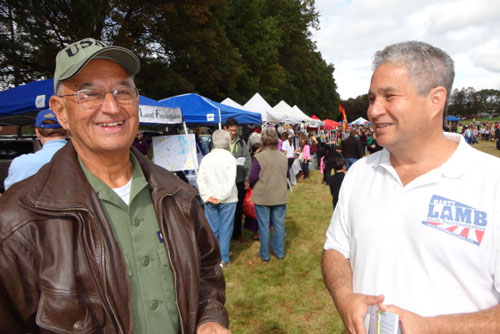 Lamb wants to study (10/09/12)
Today Marty Lamb, candidate for State Representative in the Eighth Middlesex District and small business owner, announced that when elected he will call for a study to review ending independent state authorities and making all appointments co-terminus with the Governor. (more)

Mass Water Works Association honors Eldridge and Dykema for their leadership on water infrastructure (10/09/12)
Massachusetts Water Works Association (MWWA) has selected state Senator Jamie Eldridge (D-Acton) and state Representative Carolyn Dykema (D-Holliston) to each receive the 2012 Legislator of the Year award. The award is given annually to a legislator who has supported the water works community and contributed to protecting public health and providing a safe and sufficient supply of drinking water for the residents of Massachusetts. (more)

Democrats crossing over for Marty Lamb (10/11/12)
Today Marty Lamb, Republican candidate for State Representative in the Eighth Middlesex District, released a new video of Thom Gilbert of Holliston speaking out on Lamb’s behalf. Gilbert is one of many Democrats who are crossing party lines to support Lamb’s candidacy. (more)

Dan Haley (R-Holliston), who was Carolyn Dykema’s opponent in 2008, endorses her this year.

Throw in a Paul Loscocco endorsement plus two dollars and you can buy yourself a cup of coffee.

Was that Ed Markey with Ms. Dykema? Mr. Markey’s Cap and Tax …….. I mean Cap and Trade bill could not pass through a completely Democrat controlled US Congress. If that had passed, it would have been game over for the economy. OK – I have two reasons now.

Last winter, a conversation was shared with others. Haley told Marty Lamb he was not going to help him at all in the race, not even talk. Haley thinks of himself as some kind of insider, but clearly he’s not a Party guy, and he was fired by Scott Brown’s campaign.

Nah, Haley just knows Carolyn well enough to know what a good person and committed public servant she is.

Oh, Please…..too much syrup. He was ousted by the Republican US Senator’s campaign for Massachusetts. Mr. Haley has alienated many.

I am confused. In the same conversation they are faulting Carolyn Dykema for supposedly voting too often with her (Democratic) party, but then suggesting voters should disregard Dan Haley’s endorsement of a Democratic candidate because “he’s not a Party guy, and he was fired by Scott Brown’s campaign.” Which is it? Sounds to me like Dan Haley picked the best candidate instead of walking in lock step with a Republican party that is becoming more and more extreme. Good for him. And congratulations to him for being fired by Scott Brown’s campaign, if indeed he was (Republican “facts” being what they are these days). A second congratulations to him for not being a “Party guy.” Sounds like a good thing to me.

Here is a video of one of many registered Democrats crossing over to support and vote for Marty Lamb for State Representative.
http://vimeo.com/51004833?utm_source=DEMOCRATS+CROSSING+OVER+FOR+MARTY+LAMB&utm_campaign=study&utm_medium=email

That video of Thom Gilbert who is a Democrat supporting Marty Lamb is very telling. It really does explain what we don’t have on Beacon Hill now with the legislators we have now. We don’t have transparency. We don’t have Balance. We don’t have Diversity. We don’t have discussion. It’s a very partisan one way or the highway mentality up there. Ms. Dykema votes very partisan with the Democrat Speaker 95% of the time. That’s the problem, marching in lockstep, not thinking outside the box, just follow the leader.

I watched the Holliston debate and Mr. Lamb did a fine job. Ms. Dykema said “whatever it takes” which shows the habitual desire to increase taxes. That press release certainly catches her in a number of mis-steps during the debate.

I’m glad Marty Lamb wants to do a Study on these state authorities. There needs to be accountability to the taxpayers, ratepayers and toll payers. Right now, there is virtually no accountability. Good to see this initiative.

Proof at this link.

If you want a representative who cares more about the quality of an idea than its partisan pedigree, Carolyn Dykema pledges her vote to the district she represents, not to outside groups, and she works with everyone, Democrat, Republican, and independent alike.

Again, Oh, Please……this has been posted again and again in many online commentary postings. The Republicans in the State House vote with the Democrat Speaker about 40% of the time. Republicans are bi-partisan. Democrats NEVER vote bi-partisan.

Ms. Dykema has voted with the Speaker more than 95% of the time. She has a liberal voting record of raising taxes and spending. She also voted the way the unions wanted her to vote by forcing women owned daycares to unionize.

She is beholden to the unions like the Teacher’s union (MTA), labor union, SEIU. The MTA just did a mailing for her in the district.

Here’s the article that describes the union support for Ms. Dykema. It runs deep.

Dykema notably eschewed donations from PACs or lobbyists during her campaign. She did benefit from nearly $8,000 of independent expenses by the state teachers’ union, meaning, by law, the spending was not coordinated with her campaign.

“I really wanted to raise money from individuals in the community and that’s completely what I focused on,” she said. “My campaign, from the beginning, I envisioned as a grassroots effort. We had volunteer staff and kept it local and that was a theme through the fundraising efforts.”

The MTA has a Constitutional right to make independent expenditures, but they do not coordinate their message with Carolyn’s campaign.

What we get from Carolyn Dykema is thoughtful, insightful leadership, not the unthinking knee-jerk reactions of the other side.

Now, about the voting, why can’t Marty’s supporters make an apples to apples comparison? The fair comparison to Carolyn’s record is to ask how often Republicans vote with their own leadership, GOP Leader Brad Jones.

More important, Carolyn frequently reaches across the aisle to her Republican colleagues. She and Matt Beaton (R-Shrewsbury) were instrumental in keeping Massachusetts number one in the country for good treatment of veterans, and together they passed the Valor Act.

A very telling story in the Herald this morning: Fidelity will open a major data center in Papillion, Nebraska – a suburb of Omaha.

Immediately State Senator and leading progressive Jamie Eldridge ranted about them getting tax cuts. Attitudes like lawmakers Eldridge and Dykema are exactly why business to look to move out of state.

Nebraska’s Republican Governor Dave Heineman made the announcement. Nebraska’s state debt/person is $7.4K vs our $15.7.

Keep electing these ‘progressives’ – and see how many more good jobs will leave our state.

OR, – you could try electing Marty!

Massachusetts is still 1.2 points ahead of the nation as a whole in unemployment and nearly 2 points better off in the Bureau of Labor Statistics’ numbers for underemployment.

This is a good place to live and work.

This state has the highest underemployment in the country. People can’t find full time work. They try to scrape by a little with something part time.

People are leaving the state. We lost a congressional district.

This economy cannot be sugar coated. It’s a sour lemon.

The U.S. Bureau of Labor Statistics measures unemployment in 6 ways. The press typically reports U-3. Massachusetts has long been 2 percentage points better off than America as a whole, but America has at long last started to catch up, so Massachusetts is only 1.2% ahead of the country.

The BLS reports underemployment as U-6. We have a rate of 13.5%, while America as a whole has a rate of 15.3%. We’re still ahead by nearly two points. Many, many states are worse off than we are, especially red states with no energy resources. Proof.

Lamb’s campaign has cherry-picked a private firm’s statistics. Even that firm (Chmura) acknowledges limits to its own data, “what appears to be underemployment in some cases may reflect higher standards for occupations in certain regions—for example, an occupation usually held by a person with a bachelor’s degree in one metro may be typically held by someone with a master’s degree in another metro.” Since I’m honest, I show my source.

Essentially, Chmura penalizes us statistically for being so far ahead in education! For example, we expect our teachers to have masters degrees, where other states don’t, so according to the non-standard numbers that Marty cherry-picks, our teachers incorrectly appear to be underemployed. That certainly doesn’t really mean we’re worse off.

After all, even conservative Forbes Magazine rates our quality of life as best in America.