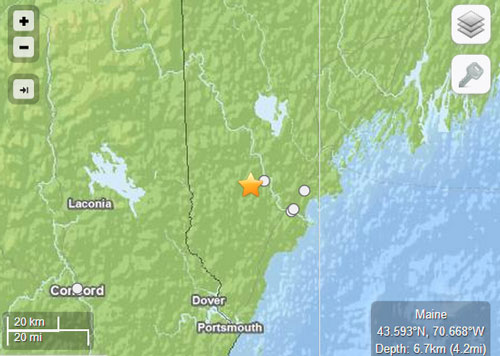 Above This map on the U.S. Geological Survey website shows the epicenter of Tuesday night’s earthquake

Some thought it was the wind, or an off-kilter washing machine. Others thought it was a passing airplane, or their kids being overly rambunctious upstairs. But turns out it was an earthquake that made homes in Southborough tremble shortly after 7:00 pm today.

The US Geological Service says the 4.6 Magnitude quake, which occurred at 7:12 pm, was centered 5km west of Hollis, Maine in the southern part of the state. Reports are coming in from across Massachusetts from those who felt the ground move.

Many of you in Southborough felt – and heard – the earthquake, and took to Twitter and Facebook to share the experience. For most, it didn’t take long to figure out what was happening.

“We knew right away, the house and the furniture, pictures, etc all shook. It felt like the house was being rocked. Even my 3 yr old said ‘why is the house moving?'” wrote reader Nicole on Facebook.

“My wife was split between the dog shaking his crate or washing machine off kilter; but I immediately knew (it was an earthquake),” tweeted reader Joe.

So far there are no reports of damage in our area.

So, did you feel the quake? Share your impressions in the comments below.

I felt it – or, really, heard window shutters rattling.