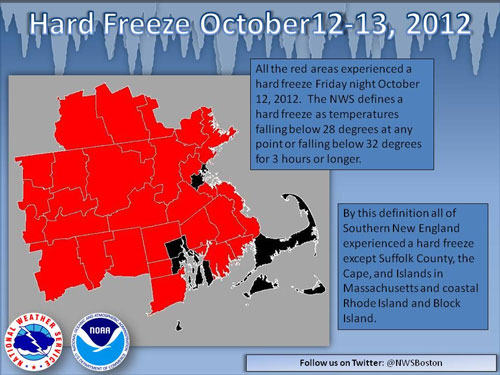 Above: Mosquitoes in our area were likely wiped out by cold temperatures last week
(via National Weather Service)

The ladybugs and stink bugs are out in force this week, but for most in Massachusetts the mosquitoes no longer are, and that has led the Southborough Board of Health to lift the outdoor activity ban they imposed back in September.

Under the ban, which was implemented to minimize the risk of mosquito-borne diseases, use of the town’s outdoor facilities, including soccer fields and playgrounds, was prohibited between the hours of 6:00 pm and 6:00 am. The restriction impacted youth sports as well as the annual Heritage Day pumpkin lighting.

Southborough Board of Health Chairman Louis Fazen III confirmed on Monday the ban has been canceled because cold temperatures late last week likely killed the majority of the mosquito population.

According to the Massachusetts Department of Public Health, risk from mosquito-borne illness is considered to continue until an area has had a hard, or killing, frost, which is defined as two consecutive hours of temperatures below 28 degrees Fahrenheit.

The National Weather Service reports most of Southern New England, including Southborough, experienced a hard freeze (which, from what I can tell, is even colder than a hard frost) overnight on Friday, October 12 and Saturday, October 13.

In an email to town officials yesterday, Fazen said while the board had rescinded the ban, they still encourage residents to use mosquito repellent in the evening and to avoid areas where mosquitoes may still exist.