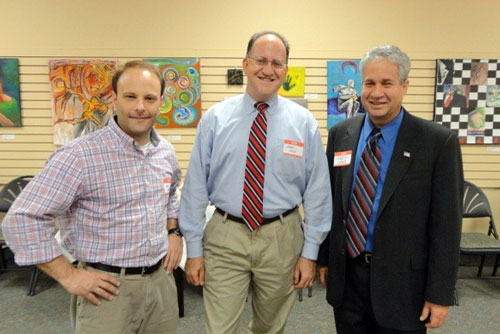 Here are all the political press releases that made it to my inbox this week. The election is 11 days away and counting.

In addition to the press releases below, Republican candidate for State Senate Dean Cavaretta sent along some videos of his recent debate with Democrat incumbent Jamie Eldridge. Follow the links to watch the Acton debate and the Devens debate in their entirety.

Rep. Dykema Partners with Selectmen to Support Westborough Veterans (October 19, 2012)
Tuesday evening, Westborough Town Meeting became the first town in the Commonwealth to adopt a veteran’s property tax work off provision enabled by passage of the VALOR act earlier this year. “Westborough is very committed to serving its veterans,” said Representative Dykema. “It’s exciting to see this new program officially adopted by the town and to know that it will soon be benefiting local veterans who have bravely served our country.” (more)

What Carolyn Dykema fails to disclose about her voting record (October 25, 2012)
Today Marty Lamb, Republican candidate for State Representative in the Eighth Middlesex District, responded to Rep. Carolyn Dykema’s letter regarding “for the district 100% of the time.” “At the Hopkinton debate last week, Rep. Dykema admitted to voting wrong. She doesn’t vote for the district. She votes for the Speaker 95.37% of the time. You don’t have to believe me. I am happy to send people her voting record,” said Lamb. “She claims to always vote for the district, but yet she sent $35million of our tax dollars to bail out Lawrence. That did not help Holliston, Hopkinton, Southborough, and Westborough.” (more)

Excellent endorsement for Marty Lamb. The National Federation of Independent Business is just that, INDEPENDENT.

The head of that organization, Bill Vernon endorsed Jim Timilty this year. He has endorsed Democrats Mike Rodrigues, Dave Torrisi, Colleen Garry, Harriett Stanley and others in the past. NFIB’s endorsements are based on legislators’ voting records during the two year legislative session with votes covering a wide range of issues like health care and health insurance, independent contractor law, unemployment insurance, and taxes. NFIB supports and endorses legislators who support lowering the cost of doing business, improving the business climate, and encouraging job growth among small businesses.

Marty Lamb is their overwhelming choice, and that’s clear because Ms. Dykema’s voting record is anti-business by far.

In addition to being endorsed by Citizens For Limited Taxation and the National Federation of Independent Business, Marty Lamb was endorsed Wednesday by the Worcester Telegram.

They speak of the need for more balance on Beacon Hill.

In part they say,

“But we continue to believe that greater political balance holds the promise of a more bipartisan and moderate fiscal policy, as well as hope for deeper reforms. Too often, the pace of change on Beacon Hill has been too slow, too timid and too beholden to special interests.”

“The key for voters is to examine the candidates in each race less by their party labels than by their commitment to common-sense governance that balances the needs of their district and the state.”

Marty Lamb is truly the Independent in this race. He’s been an unenrolled voter most of his life.

Marty Lamb as State Representative Marty Lamb is the man who will contribute to the turnaround we need in the economy with his economic revival plan. He wil restore balance and diversity on Beacon Hill, bringing his small business experience and fresh perspective, ideas and solutions. Beacon Hill needs some street smarts from a man who knows what it takes from experience, background, and his own ingenuity. Marty Lamb brings all the right ingredients.

The choice is clear – State Representative Marty Lamb who will represent and vote for the taxpayers’ interests.

In the 2012 election cycle, it has spent more than $3 million, and every red cent of that was to help Republicans or attack Democrats.

NFIB is totally independent and has endorsed a number of Democrats. That speaks for itself. The voting records of incumbent legislators is a huge factor and carries great weight. Clearly, Ms. Dykema who votes with the Speaker from Winthrop 95% of the time is far from Independent and marches in lockstep with her Party to raise taxes and burden business which kills jobs. The choice is clear and realistic for NFIB, ie, Marty Lamb is the choice for State Representative.

Ms Dykema votes in lockstep with the Speaker from Winthrop 95% of the time, which has nothing to do with Middlesex towns in this district.

Dykema voted against auditing legislative accounts. Even Suzanne Bump said she wants to do this.

She was hurting the district when she voted to force home day care people into a state union. That was a vote solely for the unions. That vote hurts a lot of local small businesses and parents who need and trust local day cares.

That vote was a big hit to women, both women who are mothers and women who run these small Mom owned daycares. It raises their costs and puts them out of business.

Dykema was on the wrong side of the issue again.

Sharing was NOT in place without Secure Communities (SC). Data stopped at the FBI and was not passed on to Homeland Security. SC brought Homeland Security into the loop. Also, prior to SC, Law Enforcement could use discretion and decide when they felt like notifying Homeland Security, leaving potential profiling problems wide open. Under SC there is no discretion, all those arrested & booked must be submitted

What could be worse than a Representative who is voting against you constantly ? They need to be replaced !

I’m getting very tired of the same half-truths and false attacks.

Carolyn Dykema votes less constantly with the Speaker than every single Republican Rep. votes with the Minority Leader. Every one. Why can’t the Lamb brigade compare apples to apples?

Now they want you to believe that 2010’s Tea Party extremist (signed a pledge that the Constitution forbids Social Security and Medicare!) is a moderate independent. Smoke and mirrors! Will Marty say anything to get elected? Is there anything he truly believes, or is he all about product positioning?

Margaret clearly doesn’t understand the daycare union bill. The owners can choose to form a union to negotiate with the state as management. They would only make this choice if they believe it would be better for them.

The data sharing of Secure Communities was already in place throughout the Eighth Middlesex. Carolyn Dykema took care to find that out. Marty Lamb, of course, did not.

Pointing out Ms Dykema’s voting record is part of this election. These are facts, not attacks. This is the truth about her. It’s public record at the State House. It cannot be denied. She agreed during the Hopkinton debate that her voting record was fair game. Of course it is. All incumbents have voting records and that carries great weight, not how many ribbons are cut or plaques are handed out.

The name calling really is tiresome. I think voters want substance, ideas, solutions, and that’s what Marty Lamb has proposed and offered and put on the table. He is the only one with an economic revival plan. He has issued a number of statements with numerous ideas on how to reform government. They are common sense and workable. Some are already being taken up by the Small business caucus in the House that he put forth as a citizen working with New Jobs For Massachusetts. Ms. Dykema refused to be part of the small business caucus.

On the contrary, Mr. Roney does not understand the bill that forces unionization on home daycare.

If a home daycare accepts ONE child a voucher they are forced into the union.

Why do daycare centers need a lobbyist ? That’s what is wrong.

This puts home daycare at a competitive disadvantage because they now have to pay union dues in the cost of doing business.

This hurts mothers and children and women owned small home daycares. Inflicting this upon women is disgraceful.

This year provides an interesting yardstick with respect to “crossing party lines.” Many life long Democrats have come out in favor of Scott Brown. With that said, I am wondering which US Senate candidate Mr. Rooney and Mr. Giorandino will be supporting with their vote.

Both Mr. Giorlandino and Mr. Rooney are registered Democrats supporting a Democrat.

Democrats supporting Democrats is no surprise. It’s nothing to write home about. That’s not what this election is about. The more important factor that trumps everything is how the elected official votes and represents constitutents on Beacon Hill. Ms Dykema’s voting record is public information and very liberal in line with the Speaker from Winthop 95% of the time. This has nothing to do with Middlesex. It’s about falling in line and following the leader and voting the way big union special interests want. Thus the endorsements by SEIU, MTA, and other unions. They do mailers for her. One hand washes another. These special interests want their loyalty, too, and loyalty means votes that favor big labor.

NFIB may lean Republican but its probably because the policies coming out of the Democratic controlled House, Senate and Governors office are often so anti-business. For example, the high fees associated with even starting a business and then the high ongoing fees. Most thinking people want a balanced government or some checks and balances, the problem is its usually not at the expense of their Rep. or Senator. Also, its virtually impossible to hold any elected Rep. to their voting record since so many bills are gaveled through with no vote on the record. In that case it is fair for a challenger to assume the vote one way or the other and their is no way the Rep. can really challenge it. Lack of accountability for incumbants goes both ways.

“Most thinking people want a balanced government or some checks and balances, the problem is its usually not at the expense of their Rep. or Senator.”

You have a point, but this year may be different –

– Four dead Americans including a diplomat in Libya (this story just gets worse by the day).

– Twenty-Five plus dead of Meningitis in the US from a drug company in Framingham (regulated by both State and Federal agencies).

And the common denominator is: Democrat Leadership. I hope many thinking people are thinking about this and checking a different box this time. Hope springs eternal for this “bitter clinger.”

Probably should have added a stone walling US Senate to that list.