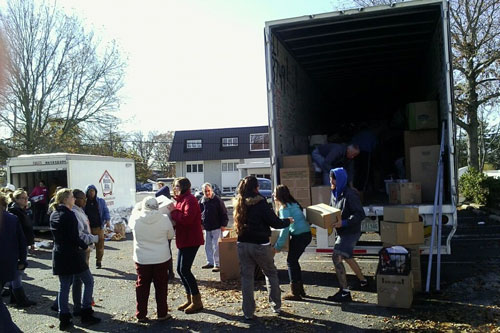 Above: Donations from Southborough being unloaded today in Toms River, New Jersey
(photo by Stefanie Cappello)

Earlier today a tractor trailer pulled into Toms River, New Jersey. In it were blankets, water, food, diapers, and other necessities to help a township ravaged by Hurricane Sandy. The supplies were collected by a group of Southborough moms who felt compelled to do what they could to help.

“I feel like we need to connect with these people,” Southborough resident Elizabeth Baldelli said of the residents of Toms River. It was Baldelli who hatched the plan to collect supplies for those hard-hit by the storm.

Baldelli contacted friends Carrie Alpert, Stefanie Cappello, and Fiona Maguire-O’Shea, and together they got the ball rolling. They would use Baldelli and Alpert’s porches as collection points. Southborough resident Leah Ammon jumped on board and collected donations at her fitness studio in Westborough. Cappello’s husband Chuck, who owns Cappello Trucking of Marlborough, would drive the truck full of supplies down to New Jersey. Maguire-O’Shea, a New Jersey native, made contact with the United Way to accept the donations. And David Eagle of Eagle Leasing in Southborough stepped in to donate a 55-foot trailer.

Baldelli said it all happened fast. “Emails went around, and when I got home from soccer on Saturday, my porch was filled.”

The donations kept coming, filling not only Baldelli’s porch but overflowing into her house. “It’s humbling and exhausting,” Baldelli said on Tuesday after all the donations had been sorted, boxed, and loaded into the tractor trailer.

Alpert said she didn’t think twice when Baldelli asked her to get involved. “I know in my heart someone would do this for me,” she said.

A couple dozen moms and kids gathered on Tuesday at Alpert’s house, followed by Baldellis’ home, to load up the trailer. Everyone lent a hand, from little kids carrying boxes of diapers, to grownups working together to haul heavier items.

“This is a little bit of the community coming together,” David Eagle said.

Originally, the plan was to drive the truck down on Wednesday, but the Nor’easter that hit that day forced the group to delay the trip until today. They arrived in Toms River this afternoon to a group of volunteers waiting to help unload the supplies.

Stephanie Cappello said when the volunteers saw how full the truck was, they were “awestruck.”

So too were the Southborough women who had a desire to help and made it happen, for the support and generosity of their friends and neighbors at home.

Quite the undertaking by these caring individuals. I’m so happy to hear that everything got there. I’m sure the community that received the donations were thrilled. God Bless you all.

What great news! A huge thanks to the moms who put this all together and gave all of us the opportunity to contribute.