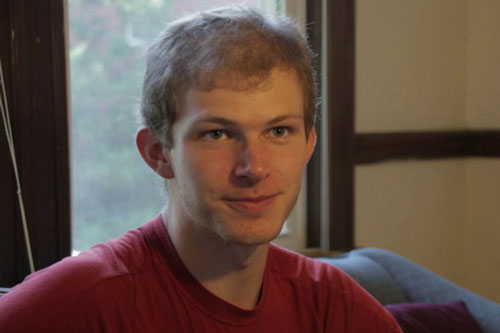 Above: Christopher Weigl of Southborough was killed while riding his bike in Boston this morning (photo via vimeo)

A Boston University graduate student from Southborough died this morning in an accident on Commonwealth Avenue in Boston. Twenty-three year old Christopher Weigl was killed when his bicycle collided with a tractor-trailer as the vehicle was making a turn onto Saint Paul Street.

Late today, the bicyclist was identified as Christopher Weigl, a graduate student at BU”s College of Communication, where faculty and students spent today mourning the death of one of their own, a clarinet-playing Eagle Scout eager to tell human stories with his camera.

“He was a terrific young man who would have made a spectacular photojournalist,’’ said Mitchell Zuckoff, a Boston University professor who worked closely with Weigl, who was in the first semester of the BU graduate program in photojournalism.

Christopher Weigl was interviewed for a multimedia profile by fellow student Sarah Ganzhorn.
Zuckoff, a former Boston Globe reporter, said Weigl sent him a paper just last night. “He was incredibly well-liked. He had all the tools you would ever hope for when thinking about hiring a journalist,’’ Zuckoff said.

Please join me in keeping the Weigl family in your thoughts and prayers. A fellow BU student did a multimedia profile of Weigl for a class project. You can view it here.

My heart goes out to the family. Love to you all.
Carol

Oh, this is so tragic. Thinking of Chris and his family.

Our thoughts and prayers are with his family . What a tragedy.

We will continue to pray for Christopher and his family along with the other Southboro families who have lost a child. They will not be forgotton.