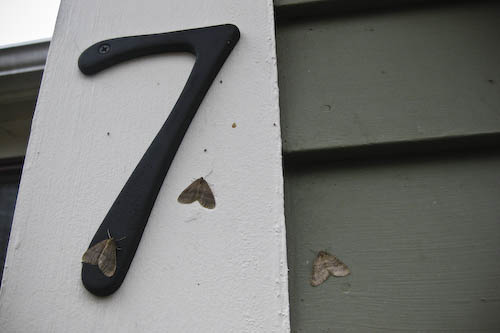 In what has become an annual occurrence, the winter moths are back. I noticed the small brown moths for the first time several years ago, and have seen them every winter since. That’s not a good thing. The moths are harmless, but the eggs they lay turn into caterpillars that can do some serious damage.

For those of you new to the winter moth phenomenon, here’s some information I posted about the moths last year.

We saw them in Southborough last year, too, but the winter moth is a relatively new pest in our area. They’re more common on the Cape and in eastern Mass, but they have been making a steady march westward. The moths start appearing around Thanksgiving, and can hang around into December and even January when the weather is mild like it has been this year.

The Massachusetts Introduced Pests Outreach Blog has an interesting write-up on the moths. According to that blog, the moths you see in flight are always males. Female winter moths are practically wingless and spend their days on tree trunks, house foundations, or other surfaces, waiting for a mate. While winter moths can be a nuisance when they cluster around homes in large numbers, they do their real damage as small green caterpillars, attacking cherry, crabapple and other trees in early spring and often completely defoliating them.

This fact sheet from UMass has some tips on limiting caterpillar damage in the spring, although from the sounds of it there isn’t a whole lot you can do.

Have you noticed the moths around your house? Did you encounter any damage from the caterpillars last spring? What steps have you taken to control the buggers? Share your thoughts in the comments.

We have tons of them staring at us right now through our windows with lights near them. In the Sunday Metrowest Daily News Julia Spitz covered the moths in her column:

She mentioned a project to kill them by introducing a parasitic fly that is their natural predator. Apparently it is starting to work. One hopes the fly introduction won’t be an example of the law of unintended consequences. Meanwhile, spraying for the caterpillars has been shown to work (at our house anyway).

What type of spray worked for you?

I wish I could answer your question about type of spray but I can’t. When we built our house we signed up with Cedarlawn to spray all the shrubs we broke our back planting. A few years ago they called to suggest that the add a winter moth spraying to the mix. I don’t know what they are using. I tried googling “what spray for winter moth” and found something. I don’t know if that would help you.

The UMASS article is quite good. At this time of year there is relatively little that you can do to kill the critters. They eat in the spring and summer right now all they have on their minds is mating.

The next opportunity to kill them comes in the late winter or early spring when you spray the trunks and branches of the trees they lay their eggs in with “Dormant Oil”. You should be able to get Dormant Oil from any garden center or Home Depot. (Volok is the Ortho version). If you see the moths swarming around a tree that is where the flightless females are and that is where they will lay their eggs. Spray that tree. You spray the trunk and branches.