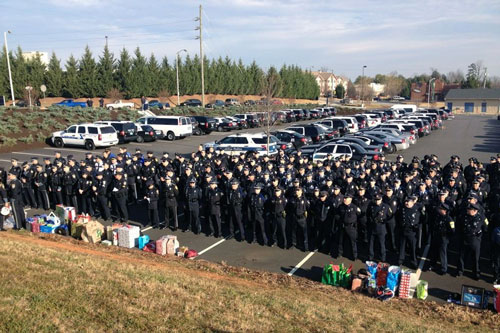 Above: Officers lining up in Virginia on Thursday morning to meet Nathan and his family
(photo via Wellesley Police)

Riding in an attention-grabbing convoy of 100 cruisers, a group of local police officers journeyed from Massachusetts to Virginia yesterday to bring cards and well wishes to a little boy battling cancer. One of those officers was from Southborough.

Southborough Sergeant Tim Slatkavitz joined about 250 of his comrades in making the trip to fulfill the Christmas wish of six-year-old Nathan Norman who was diagnosed with brain cancer three years ago. His wish was to receive cards from his heros: police officers, firemen, and EMTs.

Some officers from Burlington decided they wouldn’t just send cards, they would hand deliver them as a special surprise for Nathan. The idea quickly spread to departments throughout New England.

The Southborough Police Department wrote on its Facebook page that police officers and firefighters in town spent much of Tuesday and Wednesday filling out Christmas cards for Nathan to send along with Slatkavitz on his trip.

The convoy of officers arrived in Virginia yesterday and met Nathan and his family this morning. You can see lots of photos on the Burlington Police Department’s Twitter feed, or by following the hash tag #Cards4Nathan. (You don’t need a Twitter account to view the feeds, just follow the links.)