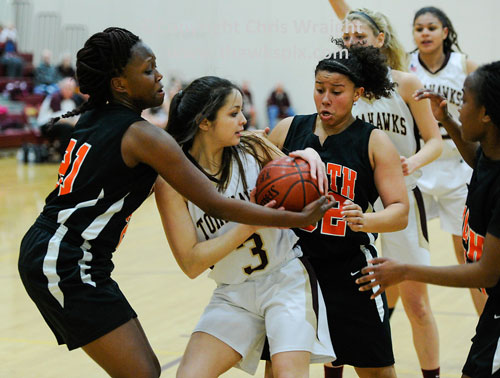 There was plenty of drama on the basketball court this weekend. After a narrow 61-59 victory over Fitchburg in the quarterfinals on Thursday evening, the top-seed Algonquin boys basketball team lost a heartbreaker to St. John’s last night in the district semifinals.

Down by 20 points early in the third quarter, Algonquin rallied to come with one with just 48 seconds left in the game. It was reminiscent of the furious rally Algonquin staged against St. John’s in their final game of the regular season. But while that game ended with an overtime victory by Algonquin, last night was not to be. The boys fell 52-51. A disappointing ending to a remarkable 20-2 season.

For the girls, the postseason continues. After a resounding 62-20 win over Worcester North on Friday night, the 2nd-seed girls face 3rd-seed Wachusett on Tuesday in the semifinals. The game starts at 6:00 pm at Clark University.

As you might recall, the boys hockey team also entered the postseason last week. The 6th-seed boys battled 3rd-seed Shrewsbury in the District 3 quarterfinals through two overtimes, before loosing in a shoot out.