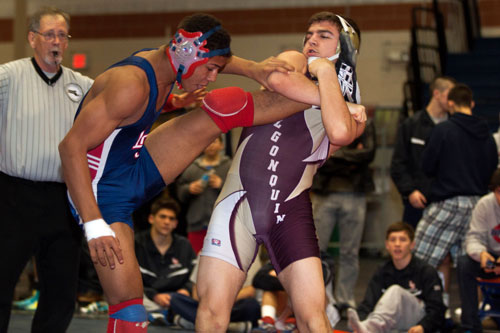 Above: Algonquin wrestlers competing in the postseason (contributed photo)

Congrats go out to Algonquin wrestlers for a successful postseason. Read all about it in this recap sent along by Beth Mazzola, Booster Representative for The Algonquin Wrestling team.

Last month while most kids were enjoying their February vacation, Algonquin wrestlers were busy competing in a week of postseason tournaments. On Saturday February 16th the very competitive Division 1 Central Massachusetts Sectional Tournament was held in Newton, MA. Head coach Brian Kramer states, “Our wrestlers competed aggressively and fought hard. The Central Mass sectional has some of the most difficult wrestlers, and competitive high schools in the state.” Assistant coach, Derek Grant added, “Our guys gave it their all and I am proud of them.”

Mazzola, Cozzolino, Saccone and Roche advanced to the States Division 1 Tournament held Tuesday and Wednesday of this past week at Newton South High School. This tournament brings the top 5 wrestlers in each weight class from all Division 1 sections together for head to head match ups. Needless to say, there were some very exciting and competitive matches held that day, and in the end several Algonquin wrestlers placed. Alex Mazzola took second at 170lbs., Joe Cozzolino took sixth at 126lbs, and Christian Saccone took seventh at 120lbs.

Following this mid-week tournament the wrestlers that placed in the top six in their weight class at the States Tournaments, Mazzola and Cozzolino, moved on to compete against the best of the best in all Massachusetts Divisions in the All-State Tournament held this past weekend at Salem High School. The long and arduous week of wrestling finally caught up with the Algonquin wrestlers. Neither Mazzola nor Cozzolino advanced after the first day, but both competed hard. A lot of off season wrestling and weight training got them this far. The two captains are already gearing up for next season in the hopes of bettering their efforts. They are encouraging others on the team to hit the mats and weights during the off season to allow them a better chance at participating the post season as well.

Congrats to all these young men, they have done a great job with the wrestling program at ARHS! Let’s hope Alex M. can find time in his busy schedule to play football his senior year! We can use him. Congrats all!