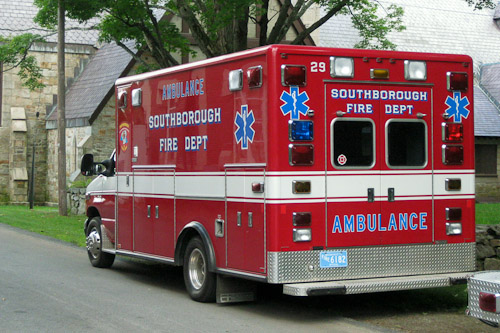 Above: The Fire Department would like to replace one of the town’s ambulances

Today we continue our look at the questions voters will tackle at Town Meeting next week with a rundown of the various capital requests. Should the town purchase a new ambulance to replace an aging one? New police cars? A generator for the Senior Center? You get to decide next week.

Capital items are generally handled in a single article – this year Article 11 – separate from the operational budgets. Here’s a look at the items on the capital request list this year.

The Board of Selectmen has voted to support all of the requests at Town Meeting. As of mid-March, Advisory had voted in favor of a majority of the items, but was still considering a couple of the requests including the replacement ambulance. Advisory has been meeting regularly in the run-up to Town Meeting, and may have voted on the remaining items at this point, but I haven’t heard. They’ll announce their support (or not) on the floor of Town Meeting.

So, what do you think of this year’s list? Are there any items you’re wondering about? Share your thoughts in the comments below.

Must we equip both the Senior Center and the schools to be emergency locations in event of widespread power outage?
I hope the 3 major Police Dept items are to be voted on separately. As I recall, the last time we discussed new Police Cars, the Chief shocked us all by claiming she could only get $500 per car as trade in. It’s easy to predict someone trying to split these major purchases into 3 items as a way to defer spending on one or more components of the request. At last report, the SPD has a much higher number of vehicles than I expected them to have. Maybe they could get by with one less?

Does anyone know what the town decided to do with the fire departments hovercraft? I know they got it at a cheap price, but I was just wondering.

My two cents would be about the phone system. Any chance they could lease a system from an Internet service provider who could give them IP based phones along with their copper lines?
Buying something outright in this day and age means maintenance contracts. I would like to see if that is the case here and there is an upfront cost plus maintenance that could be compared to a leased system with a built in contract.

The ambulance is a must. It is getting old and the wear and tear on an ambulance is unbelievable. It has had numerous mechanical problems, and with age all of the electronics and other things have reached the end of their life expectancy. The gear part of the article above covers the turnout gear, or fire resistant outerwear the firefighters wear to protect themselves. The NFPA standards on this equipment has changed several times since the old stuff was purchased. New gear will bring things into compliance with the current standards. It’s a small price to pay to protect a firefighter from injury, or worse.

I have to respectfully question the need for a new Ambulance. The last ones we purchased were all build on beefy truck chassis with diesel engines. 10 years just seems like too short a time. These are the sorts of trucks that do deliveries all day long in city traffic for years and years and years. The wear pattern is not that different.

I know that it is often viewed as easier to ask for a new capital item than to spend the money properly maintaining an asset (just look at Fayville Hall which has had a condemned 2nd floor for about a decade). But if we need to replace the Ambulance in 10 years then we really have to question how it was maintained.

Al, they have always been properly maintained. They go from cold start to high speed in seconds. The idle for long periods at scenes, everything inside is complicated electronics which wear out after time. You cannot compare an ambulance to a local delivery truck, just as you can’t compare a police cruiser to your family truckster. 10 years for an ambulance is a nice long life. Time for a new one. By the way…..I thought John Wood of Advisory had explained this to everyone a couple of months ago when the fire chief asked for a new one? Mr. Wood is in EMS…he knows.

I must respectfully disagree. If an ambulance costs 200k and lasts for 10 years then the capital costs are 20k per year. If we spent 15k next year in capital maintenance (eg a new engine) we would come out ahead. This sum would be above and beyond the sums paid for “normal” maintenance (breaks, tires, minor body work, oil, belts, batteries ect).

I have been following these items for some time and have come to believe that the taxpayers are not being well served in this area. For years as police cruisers were being swapped after 3-5 years of service I was told that “They are shot. We would be lucky to get $500 for them.” I pulled out my credit card and immediately offered $600, then $700 and stopped at $900. The funny thing is I did not end up owning a used cruiser worth only “$500”. A friend recently sent me information that on a car lot used cruisers with 80-100k miles sell for $7000 to $10,000. They are often sold for taxi cabs and then run very reliably for another 250k miles because the cab companies understand that a maintained cab is a productive, profitable cab.

So, the nasty politics of the situation is that the first line item that is cut in a budget negotiation is capital maintenance. As a result I am convinced that we do NOT properly maintain much of our equipment, just as we do NOT properly maintain our buildings. It is quite simply more politically expedient to ask for a new ambulance or police cruiser or than it is to defend a capital maintenance budget even if that is the prudent and most cost effective thing to do.

I know I will lose this argument on the floor of Town Meeting but if you pay taxes you should not be happy about this. If we set up a vehicle capital maintenance account for Police and Fire and funded this account regularly I believe taxpayers would be much better served and our equipment would not break down while in service.

Sorry Al, I will respectfully disagree with you on the ambulance. They are not made to run forever. Although it has a commercial cab and chassis under it, the box (patient compartment) has wear and tear that you can’t see. And this particular vehicle has had more than it’s share of mechanical problems. Ford had a bad year with diesels and heavy duty automatic transmissions. There are also federal standards for ambulances (US DOT KKK) that are difficult to comply with because of age. Besides, that vehicle has generated a LOT of money through billing. Unfortunately, these funds were taken away from the FD years ago and now go into the general fund. It has paid for itself, and it is time for a replacement. ‘Nuff said.

I do tend to agree with southsider about why we’d need to have two locations equipped for emergency purposes and why do we need to do both in the same year?

However, my bigger concern is the $152k for the generator for the Senior Center. I just did my whole house for less than $5k (less than $3k for the equipment), including extra expenses for plumbing and wiring. My 10kw generator will supply enough electricity for furnace, washer, microwave, refrigerator, stove, sump pump, TV, and lights in all but one room. Wouldn’t the Senior Center need furnace, lights, stove, microwave and refrigerator? I just looked at a 100kw commercial Generac generator (10 times the size of mine) and the cost of the equipment was 50k.
So, why would we be paying $150+k for the Senior Center. It makes NO sense to me, despite the fact that I see the need for an emergency facility.

If we really need an emergency facility I suggest that any of the 4 Schools in town would be vastly better suited to the task. This seems to me like “Silo Thinking” where cooperation between the municipal side and the school side of our govt rarely interact.

I also think that before we turn Cordaville Hall into another money pit we should determine if Neary is or is not going to be part of our municipal inventory. If it is then we should not be investing in Cordaville, we should be sprucing it up to sell it.

I agree with Al that the schools (that are already equipped to do so) should be used as emergency facilities instead of allocating money into other facilities for that same purpose. I know other towns use their schools for this purpose.

I am very impressed with each suggestion above. Honestly, VoIP with 5 phones would be $250 for the phones and $50 a month. yes, we could get buy with one less cruiser as two sit all the time. the generator is overkill. I mean why do we need one period? If you want one equip your home or go to a neighbors house. And the ambulance has always been a luxury. Yes I know if I am sick and need an ambulance its good to be there but all of these items folks are part of bigger and bigger government spending. Who pays for it, ever increasing taxes.Lets have a good school system, a decent police force ( three full time on at all times), decent fire department (four on at all times wiht two trucks), and keep the roads paved and cleared by the DPW. Privatize all else, get competitive bids, and for goodness sake start with getting rid of all the unions and your costs go down by 50%. AND, don’t allow the town hall administration to unionize. If they do get rid of them and hire privately.

Ask anyone who has had to ride in the back of an ambulance if it’s a luxury….they’ll tell you it’s a necessity. And any group can organize and unionize. It’s the law.

mike are you ok LOL. our ambulance is a luxury ? I guess you are one of the lucky ones that has not needed a ride. when my heart went out of wack i was very happy to have trained professionals with proper training and emergency medications to get me to the hospitial safely.I can also recall a time my son had severe medical complications that required that luxury ride you talked about.It may have saved his life.I supose you may change your mind should you or one of your family members have an emergency.