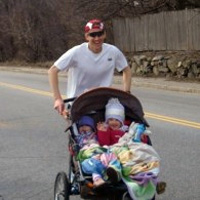 Twenty-four Southborough residents will don a Boston Marathon bib on Monday to run for themselves and for causes they hold dear. Every runner has a story, and from now until marathon day, I’ll feature as many of those stories as I can on the blog.

I run because I can. I never take that for granted. I run because it makes me feel healthy. I sometimes run for the challenge of it (such as tackling a marathon). Such challenge however is NOTHING like battling a terrible disease like ALS (a.k.a. “Lou Gehrig’s Disease”). I’m running this year’s Boston Marathon for the UMass ALS Champion Fund in honor of my step father Jack Brandley who continues to battle ALS, and others that have suffered through this terrible disease.

ALS has impacted Jack’s life in many ways, but it certainly has not broken Jack’s eternal optimism, his huge heart, and his desire to see a world without ALS. He battles each day, relentlessly going through rehab and praying that some day a cure will be found.

Each year, it is estimated that 5,000 people in the United States are newly diagnosed with ALS, a progressive, neurodegenerative disorder affecting the motor neurons in the central nervous system. Please consider joining Jack and me in the fight against ALS through support of the UMass ALS Champion Fund.

If you’d like to help John raise funds for ALS research, visit his donation page.