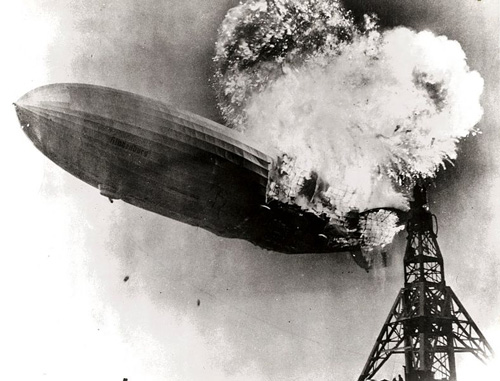 Above: The Hindenburg begins to fall seconds after catching fire (via Wikipedia)

The Southborough Historical Society will hold their annual meeting on Sunday, April 28. After the group’s business is complete, member Paul Doucette, along with Amy DeWitt, will host a presentation on the infamous Hindenburg disaster. Members of the public are invited to attend.

From the Southborough Historical Society:

Everyone knows about the tragic end of the Hindenburg which occurred 76 years ago on May 6th. Did you know the Hindenburg was the largest man-made object ever put into the sky? She had a nearly identical sister who spied on Britain and Czechoslovakia just prior to WWII? She was planned to have non-flammable helium which would have prevented the tragedy, but the U.S. had a monopoly on it and refused to sell to a militant Germany? That 64% of the people on board survived the crash?

Hear this and more stories when Southborough Historical Society member Paul Doucette, assisted by Amy DeWitt, present “A Brief History of the Hindenburg” at our annual meeting on April 28th at 2:00 pm at the Historical Society Museum. Open to members and public. (Members are invited to be there for 1:30pm for Annual Elections and Society Business Meeting immediately followed by presentation at 2:00pm).

The meeting takes place a the Southborough Historical Museum located on Common Street behind Pilgrim Church.