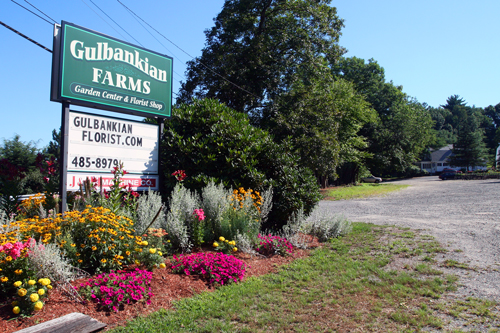 The Gulbankian family has until the end of the month to complete a list of repairs to its Mt. Vickery Road businesses that were ordered by the town in 2011, but in a recent filing the family has asked the Zoning Board of Appeals to remove the two most costly repairs.

The 2011 ruling requiring the Gulbankians to improve their site came after neighbors complained about buses being housed on the site. A subsequent inspection by the town revealed the family did not have the proper variance to operate its machine shop on the property. The Gulbankian’s garden center has been in operation since 1965, and the machine shop since 1988.

The Gulbankian family appealed the ZBA’s 2011 ruling, but the decision was upheld last year by the Worcester Superior Court, leaving the fate of the businesses in limbo.

Two of the ordered improvements include paving the bus parking area and installing a drainage and water filtering system. According to a report in the Metrowest Daily News, the family estimates the work will cost upwards of $200K, an it’s those two improvements they hope will be lifted.

An attorney for the family called the ordered changes “unnecessary and superfluous,” and said they offered no benefit to the surrounding neighborhood.

In addition to the two improvements now under review, the ZBA imposed 13 other conditions in its original ruling. ZBA Chairman Matt Hurley said in a comment on this blog in June 2012 the family had already complied with all 13.

The Gulbankian family has been wrangling with the town over zoning for three years now, and it’s a story that has elicited strong opinions from many of you.

The next chapter will unfold when the ZBA takes up the matter at its meeting on May 29. Meeting details have not been posted yet, but I’ll share them when they are.

What the heck does paving the parking lot have ANYTHING to do with operating a machine shop???

“An attorney for the family called the ordered changes “unnecessary and superfluous,” and said they offered no benefit to the surrounding neighborhood.”

The original complaint of buses being housed on the property isn’t even an issue anymore.

The ZBA wants more businesses to come into town. Treating the Gulbankian’s company like this is NO WAY to get new business here.

Before the ZBA chairman leaves at the end of June, he needs to end this. Drop the last 2 conditions, resign on a good note.

My two cents, are common sense

0
A Matter of Law

Massachusetts State law sets requirements for stormwater management. This is not a Southborough issue, this is not a ZBA issue, this is not a Gulbankian issue. If you don’t like the regulations, then you have to change state law. Until that happens, the ZBA is required BY LAW to enforce these regulations whether they (or we) like it or not. I for one am not in favor of giving Gulbankians a pass on this. They run a machine shop and that means that oil and other contaminants will run into our ground water if these regulations are not enforced. On top of that, this sets a precedent for other companies who will naturally want to be exempt from costly storm water regulations. Not acceptable.

I love the way the community has rallied around the Gulbankians because of their long-standing presence in the town. Now the focus should be on finding a way to help them raise the funds they need to meet these environmental safety regulations. If the community truly cares about the Gulbankians retaining their businesses they should put their time and money where their mouths are and start a grass roots effort to actually help them. Continued vitriol against the ZBA on this blog is not going to solve the problem. The ZBA are not elected officials playing politics and are not (or should not) be swayed by public opinion. They are volunteers bound to uphold the law. I for one would be in the front row objecting if they failed to do so.

0
Frank Crowell
Reply to  A Matter of Law

Does a ticket get written every time a police officer pulls over a car for some infraction. Of course that answer is no. This never had to get to this point.

I’m sorry, they’re just NOW concerned that the buses over there have been parked on an unpaved lot? How long have those buses been parked there? At least 16 years because they’ve been there as long as I have been in this town. Leave the Gulbankian’s alone. This is ridiculous.

I’d recommend people read the comment from Matt Hurley that’s linked in the main post. A quick glance at the situation does make it seem like this decision isn’t based on logic, but if you read his response, it clearly shows that the town had to put in some conditions. His explanation is detailed, but the summary is that if the town put no conditions on the family to get a variance, then the town ruling would be overturned in court, leaving the family unable to continue business.

A good way to show support for the Gulbankian’s…buy a few plants!

We walked through the greenhouse a few weeks ago….so many gorgeous flowers….we bought a beauty!