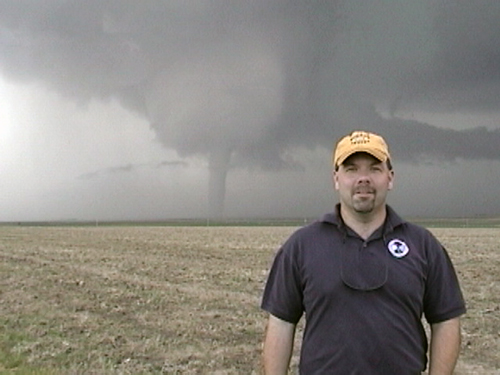 Above: Southborough resident Rich Hamel is a storm chaser with a Texas-based tour company (photo via silverliningtours.com)

Southborough resident and storm chaser Rich Hamel was in Oklahoma when the devastating tornado hit the Oklahoma City suburb of Moore earlier this week. Hamel shared his account with Boston.com.

Hamel is a guide and driver for the Texas-based Silver Linings Tours, which takes groups of people on tornado-watching tours.

Hamel chose not to chase the tornado that swept through Moore on Monday. He was in Joplin, Mo., when a similar storm thundered down on the city in 2011, killing nearly 160 people, and he learned to avoid storms in heavily populated urban areas.

While his tour group was able to keep clear of the Moore storm itself Monday, but their route today forced them through the wreckage.

“There was a railroad bridge on Interstate 44 that looked like someone had grabbed a towel and wrung it out,” he said.

You can read more in this story on Boston.com.