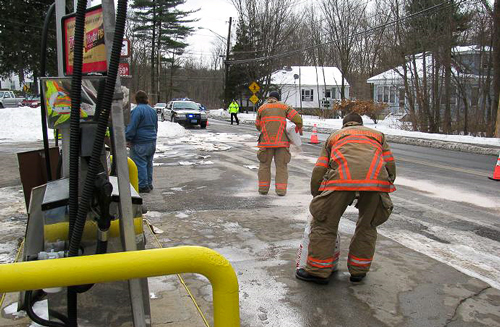 Above: Firefighters respond to a gas spill at Custom Automotive in 2009 (photo courtesy of the Southborough Fire Department)

Custom Automotive Engineering’s license to store fuel underground was revoked by Selectman at Tuesday evening’s meeting. According to Fire Chief Joe Mauro, the Cordaville Road business has been continually non-compliant in its required paperwork and communication with the fire department and town.

Selectmen considered revoking the fuel storage license two years ago after a gasoline spill on Christmas Eve 2009, but decided to give the business a second chance.

Robert Michalik, an attorney for Custom Automotive, asserted that the company has made sincere efforts to comply and to develop the fuel business. Michalik told the Metrowest Daily News owner Louis Aswad intends to appeal the board’s decision in court.

Michalik said the 2009 gas spill was a unique incident when the station was closed. He claimed that none of the other issues mounted to safety concerns.

Chief Mauro disagreed. “We have attempted to try and work with him and get the station operational again,” Mauro said. “Every time it seems to be crunch time for him, there’s a piece of paper shows up or he says he’s going to do something. But I don’t have anything concrete at this point to make me feel comfortable that he’s going to be able to operate this station in a safe manner.”

Mauro’s concerns echo those of his predecessor and brother, John Mauro Jr., who noted serious concerns in a Sept. 2010 hearing regarding a spill he said happened on Christmas Eve of 2009.

“The only thing that prevented 40 gallons of gas from entering the Sudbury River was a snow bank,” John Mauro Jr. said at the time.

Michalik tried to make a case for the need for a gas station in that part of town (Cordaville Road near Woodland Road). He also stated that the gas station was vital to the survival of a small business. Chairman Dan Kolenda stated that safety and compliance issues were more important.

Selectman Bill Boland cited Custom Automotive’s last minute report to the committee as part of a long term pattern that hasn’t changed since the Selectmen gave them a second chance two years ago. Boland and Kolenda both voted to revoke the license. Selectman John Rooney recused himself from the hearing because he has had work performed at the station in the past.

Curiosity gets the best of me here……with the license revoked, what becomes of the underground storage tanks and any product that remains in them?

The tanks were emptied of fuel two years ago. Now the owner is required to remove them.