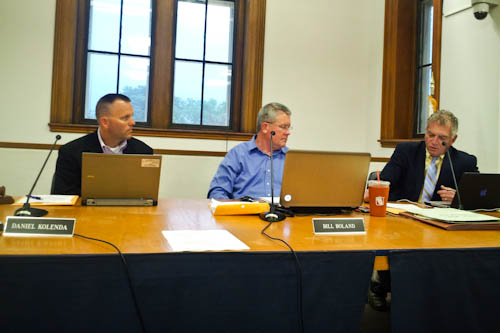 The Board of Selectmen has a new chairman. Historically, the board rotates the position, with the selectman in the final year of his or her elected term getting control of the gavel. This year that honor falls to Selectman Dan Kolenda, and at this week’s meeting Kolenda’s fellow board members unanimously elected him their new leader.

During a break in Tuesday’s meeting, Kolenda said his top priority for the coming year is the town’s fiscal situation. “We have to do the best we can to maintain the level of service Southborough residents are accustomed to without a material increase in taxes,” he said.

Kolenda said key to doing that will be to continue to look closely at all town budgets. He also said the board needs to work closely with school administrators and the school committees to make sure those budgets are “as tight as can be.”

School administrators next year are expected to begin negotiation on a new contract for teachers as the current 3-year contract expires in 2014. Kolenda said the board needs to work with the schools to to ensure the contract is affordable.

Kolenda’s term as selectmen expires next year, and if he decides to run for reelection, he may find himself with plenty of company. If the state legislature approves in time Southborough’s request to increase the Board of Selectmen from three to five members, there will be three selectmen seats up for grabs next year.

“I remain hopeful we will have a plethora of candidates,” Kolenda said. “But this year’s turnout gives me great pause.”

Kolenda opposed expanding the board on concerns not enough qualified candidates would step forward to run.