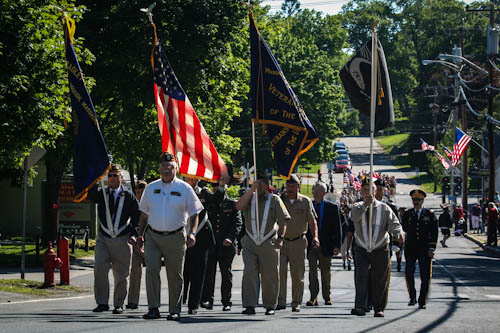 On an unseasonably cool day under bright blue sky, a crowd of Southborough residents turned out to honor the town’s veterans and remember those lost in battle. The annual Memorial Day parade passed through downtown and then wound its way to each of the town’s cemeteries and war memorials.

At each stop the names of those killed in battle, from the Revolutionary War through Vietnam, were read, followed by a gun salute. VFW Post 3276 Commander Steve Whynot also asked those assembled to also remember John Misener and Charles Hamel, two of Southborough’s World War II veterans who passed away in the last year. Both were fixtures at past Memorial Day remembrances.

A wreath was laid at the All Wars Memorial in honor of Alice Foley, who died last week. She was the mother of Robert Foley, Jr., the only Southborough resident to lose his life in the Vietnam War. Foley family members attended the Memorial Day service, and son James helped lay the wreath in his mother’s honor.

In another touching tribute, Taps was played by Algonquin ninth grader Brian Keefe using a trumpet that belonged to Eric Green. A Trottier seventh grader at the time, Green died unexpectedly in January 2012.

See photos of the event below. Click a thumbnail in the gallery to enlarge.