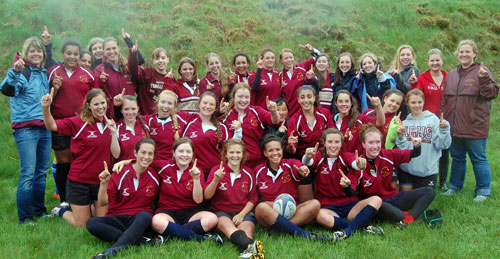 Above: The Algonquin girls rugby team after their championship win on Saturday (contributed photo)

Congratulations to the Algonquin girls rugby team for a dominating performance at the high school state championships on Saturday at Fort Devens. The team ended the tournament with their third consecutive state title.

Congratulations to these athletes for their great season and accomplishments.

I am troubled whenever I see such a disparity in a score such as their 77-0 victory against Lincoln-Sudbury. If the coach reads this blog, perhaps she could explain if this type of a score is normal in rugby? I know nothing about rugby.

The Algonquin girls were amazing to watch! The backs were like poetry in motion in their half-V-formation throwing the ball from one to the next right before they were being taken down in a tackle. The forwards were strong and demanding. Truly an awesome display of skill. Great job girls! And great coaching by Coach Bourdon and Coach Philbin.