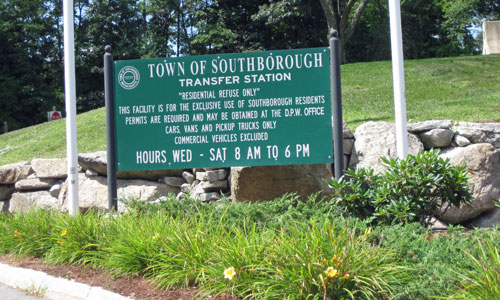 Above: Proposed changes would reduce Transfer Station hours to three days per week

The last time the Board of Selectmen dealt with the Swap Shop it was huge news. The board ultimately backed off its plan at the time to shutter the leave-and-take area at the Transfer Station after unprecedented public outcry. This week they’ll take another look at the Swap Shop and consider not whether to close it altogether, but whether operations should be scaled back.

The latest proposal, which selectmen will consider at a meeting on Tuesday, aims to make the Swap Shop a seasonal resource, open from mid-April through the end of October. It’s part of a larger plan to reduce operating expenses at the Transfer Station.

Selectmen will also consider whether to reduce overall Transfer Station hours from four 10-hour days to three 8-hour days. The new schedule proposed by DPW Superintendent Karen Galligan would be Tuesday, Thursday, and Saturday from 9:00 am to 5:00 pm.

It’s standard practice for the Board of Selectmen to review Transfer Station rules and regulations each June, and to vote on modifications and adjustments. It is that annual review that prompted the latest set of proposed changes, which were requested by selectmen at a meeting last month.

In addition to lowering costs, selectmen will also look at ways to boost revenue, including raising the cost of a Transfer Station sticker from $175 to $225. Seniors, who currently get their stickers for free, would pay $10 each for their first two stickers. Discounts for both regular and senior stickers would be available if the sticker is purchased online or by mail before September 15.

Also on the table are fees for disposal of bulky items like furniture, refrigerators, carpeting, and more. Fees range from $5 to $15 depending on the type of trash.

Currently, residents with a Transfer Station sticker can dispose of up to two 32-gallon barrels of construction or demolition debris at no cost. Under the new rules, it would cost $10 per barrel to dispose of the same debris.

The board will review the proposed changes at their meeting on Tuesday, June 4, at 7:00 pm in the Town House Hearing Room (second floor). The meeting is open to the public, and should result in some active discussion as the three selectmen have demonstrated in the past they are nowhere near consensus on Transfer Station issues.

You can check out the proposed rules and regulations for yourself in the packet for Tuesday’s meeting.

The Town of Oak Bluffs on the ISLAND of Martha’s Vineyard charges $25 a year for access to their dump and you need to put a $5 sticker on each 30-33 gallon bag you throw out. They also offer weighed disposal where you go on a scale before and after tossing out a lot of trash. That’s how they handle contractor debris too.

$25 a year and $5 a bag on an island. Open Monday through Saturday from 7AM to 2:45PM. Free recycling with sticker. Free brush and grass with sticker. They also offer curbside pickup for only the cost of a sticker.

The volume of people who own property but do not regularly consume town provided resources all year round helps but then their tax rate is $7.71 compared to our $16.14.

I’m sure there are other economic factors at work, privately owned facility, volume discounts for transportation, seasonal workers with little benefits, but I can’t imagine that this is so difficult that we can’t learn from our neighbors to the south. Lets consider stickers and not bags, far easy to distribute and cost less to product. In either case you need some eyes by the hopper to see if a resident is using them. Maybe that same person could offer to recycle anything that a less eco friendly person is likely to and also stop contractors who abuse the system. Why can’t trash and recycling be closer? Then people might be more inclined to walk another 10 feet to chuck their recycling. If we put the resources that went into the FOUR sheds into moving a dumpster for cardboard over to the hopper then maybe we could get somewhere.

The only thing we can do is limit what we pay to incinerate, stop folks who are stealing quantities of valuable metal, increase fees, or limit hours of operation.

We like the hours, the swap shop, and I’ll gladly pay by the pound for anything I take from the metal section. You guys figure out how to give me what I am used to without being too ridiculous on costs. Those folks on the Vineyard can do it and their 7 miles out to sea!

And as always let’s close a school and sell it to someone who will pay taxes.

0
Will M.
Reply to  Matthew

Well stated, Matthew – thanks for your thoughtful and well-researched response. I’m also a Southborough resident and can only echo your own opinion, which is consistent with that of more than a few of my neighbors: leave the transfer station and Swap Shop alone, already! Consider scrutinizing the real school budget – or selling a school – if it has truly come to that.

I know a number of concerned residents won’t be able to make Tuesday’s meeting. I would be grateful is someone could post an email address for the Southborough Board of Selectmen to this forum, so residents can forward their concerns prior to the meeting. Thanks :-)

I hope lots of people let their feelings be known since some of the changes proposed by Ms Galligan are not what the “quiet majority” want and others would be costly, difficult to administer, and create a traffic nighmare–especially if we had reduced hours and had to pay as we dumped for the larger items.

I, for one, am opposed to reducing total hours, but would be like to see the hours spread over more days. I also fine it hard to believe salary costs couldn’t be reduced by hiring a few part time non-benefit people instead of paying time and a half on Saturdays to full time people. (Actually, I’d like to know how much of the personnel costs are for overtime). I also agree with closing a school but that’s not the Selectmen’s jurisdiction.

I hope many of you reading this will make it a priority to come to the meeting or write to the selectmen to make your opinion known.

I would hope that the Selectmen have scanned this site over the past couple of weeks and concluded that the people who voted them in to office want nothing to do with any radical changes to the Transfer Station’s operation or fee structure. Maybe these elected officials will finally stop beating this horse. The TS is a town provided service and the significant majority are comfortable with subsidizing it via taxes.

I completely agree. All this nonsense stems from the idea that the transfer station should be self-funding. Who came up with this brilliant idea? Why are we stirring up trouble when the majority are satisfied with the way things are?

How many FTEs are currently budgeted to the transfer station?

I agree that we should stop trying to change the Transfer Station. It is a service that my taxes help pay for. It makes me feel good to recycle and to donate to the Swap Shop. It also is somewhat of a community gathering place. It is useful in so many ways.
Also, I don’t like the proposed hours because it is impractical for those who try to get there on a weekday after work. Saturdays are already too crowded. I’d prefer more half days that extend to 6pm. Or maybe one day that starts very early and another that goes late.

I like the idea of a three-day schedule, especially since one of those days is Tuesday. In the heat of summer, holding over weekend trash until Wednesday was always inexplicable to me. I am however very worried about the reduced before- and after-work hours. The TS is crowded enough on the weekend. Delays on Saturday will just encourage people to dump EVERYTHING in the hopper instead of recycling. The cost savings is going to be negated by an increase in hopper volume AND the environment will suffer. Didn’t one of our selectmen already admit he often does this on a weekend with the hours we have? Someone is not thinking properly about this issue.

So, in the midst of what seems to be a never ending idea of charging residents more and more, the BOS raised the sticker fee again. They raise our taxes, raise every fee from town trash to schools and never consider how much they are gauging us. It would be nice if the BOS would realize that not everybody is a lawyer or a doctor or somebody with a high paid salary. Maybe John Rooney has no problem with this but I do. I am sure I am not alone in this either. I barely make ends meet now. This will just encourage people more and more to dump trash on the side of the roads. It may be illegal but some of us will soon have no choice. Way to go and represent your people!

You had your chance to influence the outcome.

The meeting was last night. Decision made.

I sent my thoughts to the BOS. I could not make the meeting as I had to work to pay the fees!! Nor everyone works the same hours as you.

resident, Mr. Rooney was the only selectman who opposed any increase in the fees. Check your facts before taking aim.

Whether he opposed or not, he is part of the problem by not using the recycling – he admitted that!

Would someone please post the outcome of the meeting. Thanks!