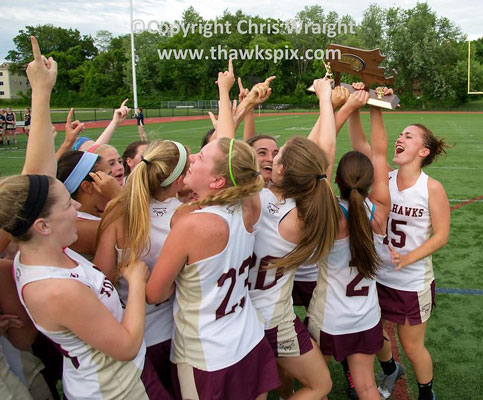 Above: The Algonquin girls lacrosse team celebrates its championship win on Friday (photo by Chris Wraight)

Congratulations go out to the Algonquin girls lacrosse team for capturing the Central Division 1 title for the second year in a row. The top-ranked girls soundly beat 3rd-seed Shrewsbury at Foley Stadium on Friday by a score of 18-9.

The girls now head to the state semifinals, where they’ll face West Division 1 champs Longmeadow. The game is a repeat of last year’s state semifinals. Algonquin won that match 10-9 to make it to the state championship round. Here’s hoping for a similar outcome this year.

The semifinal match takes place on Tuesday at 5:00 pm at Foley Stadium in Worcester.

The game was just postponed to tomorrow,Wed the 12th, still 5PM at Foley in Worcester.