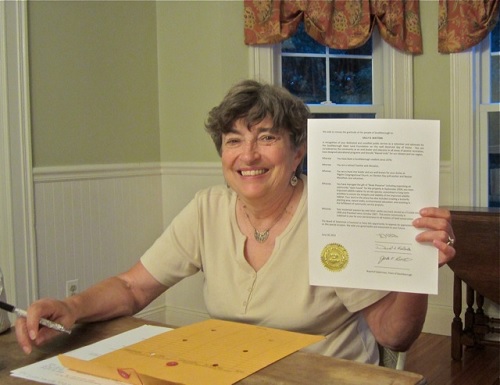 Watters served as a Trustee of SOLF since 1990 and president since 2007. SOLF shared:

During her term as president, SOLF received the 56-acre parcel now known as the Beals Preserve. She worked with Trustees, volunteers and the U.S. Dept. of Agriculture to turn a section into an “early succession habitat”. The habitat promotes biodiversity for at-risk species.

SOLF has also used the Beals Preserve as the site for recreation and nature seminars. On September 15th, it will be the location for SOLF’s 25th anniversary.

In addition to her good works with SOLF, Sally supports Pilgrim Congregational Church, is an Election Day poll volunteer, and helps organize the Boston Marathon at the Hopkinton, MA starting line.