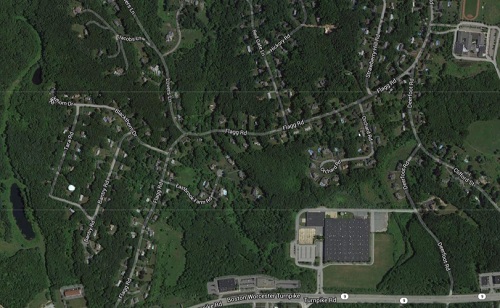 Above: Bantry Road’s cul de sac will be the point of entry for a 180 unit 40B condo development if Capital Group Properties’ latest proposal is accepted. (Photo from Google Maps)

Last night at the Board of Selectmen meeting, the house was packed. Most attending were there for the first item on the agenda – review of an updated traffic study commissioned by Capital Group Properties.

The study was to determine the effects of moving the egress for a proposed 180 unit 40B condo development. The newly planned access point is through the residential area of Bantry and Tara Road.

Selectmen John Rooney and Bill Boland opined their agreement with the crowd that the new proposal is much worse than the original. Boland also stated his opinion that the commercially zoned land should be restricted to commercial use.

Boland was openly skeptical of the plans sincerity. A quote The Metrowest Daily News picked up that I apparently missed:

“To be blunt, I think this proposal almost looks like, ‘Well no one will buy this, so this is a better chance to get what we had in the first place,’”Selectman Bill Boland said.

Concerned neighbors were there to ask questions and express their dismay at this turn of events.

The proposed entry to Bantry Road would be through its current cul de sac. The new traffic study projects an increase through Bantry Road from 13 trips during the peak am hour to 48 (an over 190% increase). Traffic coming out of Blackthorne Road onto Flagg would increase from 22 to 91 turns during that same hour (a 313% increase).

The previous plan projected increasing traffic turning from Flagg Road onto Route 9 from 69 in peak morning hour to 121. The revised plan lowers that to 114, but traveling a longer distance on Flagg. It also increases traffic in the other direction, through Deerfoot Road toward Main Street. One concern of residents was pedestrian traffic. The study did not cover the impact to pedestrians on the narrow road with no sidewalk in an area where children walk to school.

The new access point would split the residential traffic into a residential area, and keep commercial traffic out of that area. Scully said that Capital Group Properties would work with the individual neighborhoods to create plans to “calm traffic”. Speed bumps were one option he shared that neighbors might choose.

In Chairman Dan Kolenda’s absence, Boland led the meeting last night. He explained the process of review to the crowd. The proposal by Capital Group Properties is being submitted to the MassHousing. The town now has 30 days to submit opinions (through Selectmen) to MassHousing.

Selectmen will collect opinions on the plan’s impact to the community from residents, town fire and police chiefs, and committees. They will add their own opinions and send the packet to  MassHousing.  MassHousing will make their decision and send it to the town Zoning Board of Appeals. The ZBA will then announce an open meeting to make a decision.

Boland wanted to clear up a perception that 40B projects are automatically approved by MassHousing. He also wanted residents to understand the ZBA’s authority if MassHousing accepts the plan. The ZBA could reject it, but the developer would have the right to appeal their decision in court.

Rooney pointed out that other developments in town have been approved at a smaller scale than initially proposed.

Boland stated for the crowd that anyone submitting opinions should make them substantive. He explained that MassHousing doesn’t listen to opinions that simply dislike the project. They do listen to specific concerns, such as traffic and safety issues.

Selectmen and residents grilled Scully about the accuracy of the study. They were concerned that the traffic was grossly underestimated. Scully defended that the numbers are statistically accurate based on hundreds of site studies and borne out by industry use over the years. Residents requested that Scully make information available in coming weeks on comparable developments and their actual traffic patterns.

Boland thanked the crowd for their civility. During Capital Group’s presentations there were a few outbursts of cynical laughter (at claims of small impact to the area traffic). But residents were generally polite, though skeptical, in their questioning and comments.

Selectmen are requesting that opinions be submitted to them by September 3rd to allow them time to organize before forwarding to MassHousing. Letters can be mailed or dropped off to Selectmen at Town House. Or you can email selectmen@southboroughma.com.

I just came across an interesting article in the trade magazine “New England Real Estate Journal (nerej)” from December of 2012. It is a brief biography of Mr. Depetri and the beginnings of Capital Group Properties. I quote “Depietri is a contributor to many local charities; he is a firm believer that it is important to give back to the community. He takes great pride in his developments and their positive impact on the economy and local neighborhoods.” Whether you are looking at his first plan or his second plan, neither one fits that mantra. Nor does his creative reworking of the plan mitigate the legitimate safety and traffic concerns brought up at the first meeting.

Does anyone know where southboro stands w our percentage of 40b? Seems like a lot happening at once and it’s going to have a huge negative effect on schools, safety and traffic for everyone.

I believe we are 80+ units away. And you are correct about the impact on our schools and safety.

A friend called the town house Tuesday with that inquiry and some one there gave the number we’re short as 110. That’s a big difference, would like to know number for sure. Also, does it include the Oak Hill Road project that will be starting soon? Wouldn’t it be nice to have a Town Planner right now?!

I believe that Mr. DePetri recently requested permission to convert a 40b project on Oregon Road to an over 55 senior development because of the weak market conditions for 40b developments. He will be in front of the ZBA this month to make the request based on developer hardship. Is Mr. DePetri being disingenuous about Park Central or Oregon Road?