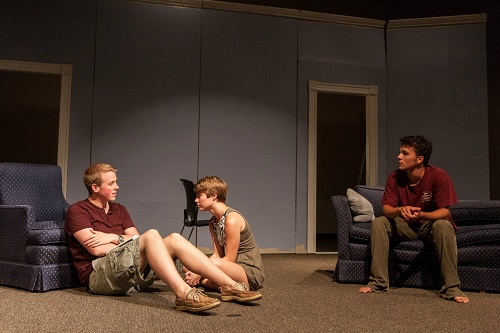 Above: Black Box Productions, run by local students, rehearses its production of “Company” opening this Thursday. (Photo from Facebook)

Black Box Productions was founded in 2012 “to harness the energy, creativity and enthusiasm that students bring to the theater.” Comprised of college and high school students, the troupe consists largely of current or former ARHS students.

From the producers and directors to the cast and technical crew, students are in charge. Black Box’s mission is to create high-quality, meaningful and memorable productions, while providing students with the opportunity to create theater the way they want it.

Southborough resident Stephen Tzianabos is both Co-Founder of the troup and the Musical Director. Tzianabos is currently studying Music Education and Vocal Performances at the Ithaca College School of Music.

The original production of “Company” was nominated for a record-setting fourteen Tony Awards and won six, including for best Musical, Musical Book, Original Music, and Original Lyrics.

COMPANY follows five married, once-married, or soon-to-be married couples and their mutual friend, Robert, a 35-year-old bachelor who has been unable to connect in a long-term relationship.

Tickets are $10, and can be purchased or reserved online at www.bboxproductions.org. Tickets can also be purchased at the door if available.

You don’t want to miss this show! The cast and crew have worked tirelessly to create a riveting, hilarious, and poignant production for you. We’d love to see you there!!

Saw the show Thursday night. It was fabulous! I highly recommend it!