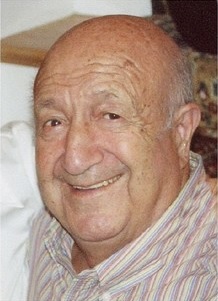 Charles H. (Charlie) Vanesian, 91, of Southborough, formerly of Newton and Chelsea, passed peacefully in his home on September 26, 2013, surrounded by his loving family. He was the devoted husband for 53 years to Maureen (Overlan). They met at the Wonderland Ballroom in Revere in 1958. They were a great dance couple and won many local contests.

In 1942, Charlie enlisted in the US Navy and served as a “Fighting Seabee” in both the Guadalcanal and Aleutian Islands campaigns. Upon being honorably discharged, Charlie attended and graduated with a degree in Engineering from Northeastern University in 1947.

He was preceded in death by his parents, Harry and Mary, and sisters, Mary and Anne. In addition to his loving wife he is survived by four children. Dr. Frederick Fitzgerald and his wife Cindy of Greenwood, FL., Maura (Albano) and her husband Stephen of Newton, Charles of Newton, and Joseph and his wife Paula of Holliston.

He also leaves behind 8 cherished grandchildren. Patrick Fitzgerald of Jacksonville, FL; Joseph, Jason, Stephen and Robert Albano; Joseph, Christopher and Liam Vanesian. He had one great-grandson, Harley Fitzgerald. His family was his greatest source of pride and his greatest legacy.

He and Maureen also wintered in Gulfport, Florida for many years. He worked at Charles T. Main and Stone and Webster. His dance prowess was evidenced by leading the hora dance at each of his children’s wedding. He was an avid sport fan of all the local sports teams, including his “adopted alma mater” Boston College.

Visitation with the family will be from 4-7pm on at Matarese Funeral Home, Ashland on Sunday September 29th.

The funeral service will be held Moday with Rev Cheryl Leshay officiating at 10:00am at the Matarese Funeral Home.

Burial will follow at Holy Cross Cemetery, Malden, MA. Expressions of sympathy may be made to Greenwood Baptist Church, P.O. Box 249, Greenwood FL, 32443 (In Memory of Charles H. Vanesian)