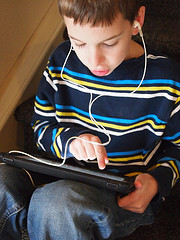 Over the past few days the Neary iPad Pilot controversy has continued to develop. So here’s a brief update.

This weekend, Neary’s Facebook posted a video defending the use of iPads as an important teaching tool.

Meanwhile, Fiona Maguire-O’Shea has continued to organize parents in opposition to the proposed parent funding of the pilot. She has created an online petition.

Parents should not be burdened the cost of $550-$700 per child—an expensive…”school supply”. This project invites singling out/isolating children who cannot afford it. Although stated they can borrow the school’s iPads for the day, we believe it can create a social stigma when a child doesn’t own one as evident on school bus rides, in the hallways, etc. If the school wants to take on this project, the school should fund it or fundraise for it.

PLEASE NOTE: This is NOT a vote against some sort of in-school iPad project to be funded by the school. That is something we are open to exploring.

Thank you for posting an update, Beth!

Just to be clear, my petition is in response to a recommendation by one of the organizers to arrive at Wednesday evening’s meeting with 50 signatures rather than 50 people, although I think we might have 50 people in attendance anyway.

As per John Butler’s comments on mysouthborough.com, the format of this meeting does not lend itself to open discussion. The petition is to help aid in the format of the meeting.

The petition focuses on the two primary points I have received most feedback about:

2. Eliminating the option of a take-home program.

It does not cover the other areas of concern, such as the amount of screen time involved–students using their iPads between 1/4 to 1/3 of the entire school day initially, as per the 9/24 parent meeting notes.

However, the petition should help eliminate these two obstacles listed above, so that we can determine common ground for further discussion on this pilot project.

Although there are many facets to this initiative which require more exploration it is important to realize that there are many Southborough parents who are open to discussing the 1:1 initiative in greater detail to understand the options available. Please make sure to attend the meeting so the dialogue represents alternative views to many posted here and on Facebook. Don’t assume someone will represent your opinion. Mr Capra also told me that it is important that all are represented at the meeting. This is one situation where your presence can not be replaced with Social Media.

I see. So its critical for the 4th graders to have technology more aggressively introduced into their school procedures, but the School Committee doesn’t need to do likewise…

Yes- The comment was specific to the campaign against the initiative that originated on “Facebook” and this blog- not the video.
I am merely suggesting that one’s attendance at the school committee meeting is important in order to also represent parents who are open to further exploration of the program as opposed to the “anti” social media campaign.

The proposal is that 4th graders will be using iPads for 1/4 to 1/3 of the school day? Seriously? I really think school administration should rethink this. As stated in an earlier post, I am an advocate of learning about and using technology, but it should be age appropriate. I understand that Ms. Murdock likes to be innovative and progressive but this is one of those times when less is more. Teach our children the basics and have them well grounded in those skills before using so much of their day on activities that rob them of a good, old fashioned education. This should NOT be about adult agendas and egos, this should be about children and what is truly best for them. No matter how much technology we have at our disposal, there are so many benefits to good, old fashioned reading, writing and arithmetic. Please do not rob our children of those experiences, especially our youngest students. Wait for middle school for using these more advanced tools for so much of their in school time. Our children will thank you!

So long as there is NEVER a burden on taxpayers to fund iPads for children that’s fine. I trust that the cost of whatever the program turns out to be is borne by the beneficiaries. iPads are NOT a right. And parents might ask themselves about a cheaper Android tablet solution.

I believe you are saying that we should buy the children cheaper tablets. That is a good idea, but here are my concerns (assuming that you are ok with a parent supplied mandate):

1 – A cheaper option is not currently supported by the current proposal from the school
2 – Will it really be “cheaper” when I’ll probably have to replace the item at least once. One of my main concerns is that I don’t think my child is responsible enough to transport a tablet to and from school without it being lost or stolen.

SBres. My interest is restricted to trying to ensure that this project has zero cost to taxpayers – ever. Only parents pay anything. Your points are good, but my field of vision is very narrow on this topic. I’m against mandates in principle. We can see how a new mandate is tearing the country apart.

I saw this article online this morning

A simple google search brought up this discussion amongst techies.
It comes down to managing the device and cost and as one person put it even with the higher cost of iPads they still went with them which only showed how good Apples marketing was.
Check it out.
http://community.spiceworks.com/topic/292218-ipad-or-android-for-schools

Who payed for the iPads in the pilot BTW?

I think the leaders at Neary are completely missing the point. No one is arguing that technology isn’t an important teaching tool. The arguments are: do we need technology to be 1:1, if so does it need to be an iPad, and who is going to pay for it. The video doesn’t address any of these real issues. All it does is demonstrate how iPads allow the children to do things that children have been doing on normal computers for at least 15 years now.