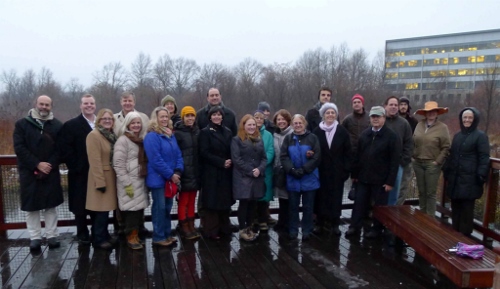 Our State Senator and Representative share news with me more frequently than I can share it with you. Here are the press releases I’ve been stock piling!

Dykema, Eldridge and Colleagues Tour Constructed Wetland at Alewife Reservation – November 13, 2013:
Green infrastructure increasingly provides opportunities to find creative solutions for water management. Monday Representative Carolyn Dykema and Senator Jamie Eldridge joined their colleagues in the legislature from across the Commonwealth for a tour of the Constructed Wetland in the City of Cambridge at the MA Department of Conservation and Recreation (DCR) Alewife Reservation to see one of the largest green infrastructure projects in the US.

“More and more often, natural processes like constructed wetlands are being used to complement traditional pipe infrastructure, providing lower costs and better benefits to the environment and the public,” said Representative Dykema. “In the legislature, we need to create more incentives and opportunities for communities to choose green infrastructure like the remarkable project here at Alewife. It’s my hope that someday projects like this will become the standard, rather than the exception.” (read more)

Joint Committee On Housing To Hold Oversight Hearing On Homelessness In Massachusetts – December 17, 2013:
On Wednesday, December 18, the Joint Committee on Housing will hold an oversight hearing to examine the rise in homelessness across Massachusetts. The committee will hear testimony regarding the Department of Housing and Community Development’s new initiatives within the Emergency Assistance program to more efficiently administer Emergency Assistance and wind down the practice of housing families in hotels and motels. The committee will also hear testimony from providers and advocates about innovative solutions to reduce family homelessness in the Commonwealth and from families, who are currently living in shelters, about their experiences. (read more)

Senator Eldridge Interviews Constituent About Experiences Living On Minimum Wage – December 23, 2013
Senator Eldridge recently interviewed friend and constituent Maureen Parlon on Acton Cable TV about her experiences living on minimum wage in Massachusetts. Parlon is currently employed as a cashier at a local supermarket where she currently earns $9/hour. You can watch Senator Eldridge’s interview of Maureen here: http://view.vzaar.com/1429020/download, which will be airing on each community’s cable access channel soon.

Senator Eldridge Votes To Pass Comprehensive Election Reform Bill – January 17, 2014
The Senate on Thursday, January 16th voted 37-1 to pass legislation reforming the election laws in the Commonwealth by authorizing early voting for state and federal elections and primaries, allowing residents to register to vote on Election Day and creating an online voter registration system. The bill also allows 16 and 17-year-olds to pre-register to vote. (read more)

Senator Eldridge Launches New And Improved Website – January 24, 2014
“The new website updates will make it even easier for residents to stay up-to-date on the work I am doing both in the district and at the State House,” said Senator Eldridge. “I hope the new and improved website will better serve constituents and inform them about my legislation this session and the services that are available to them.” (read more)