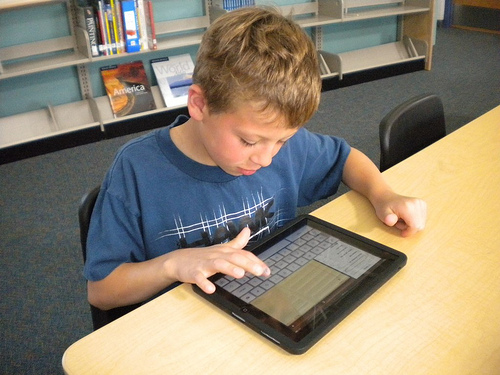 As reported in November, the school is no longer seeking to run a parent funded 1:1 pilot. At that time, Murdock announced school plans to purchase more iPads.

The new goal was to have one set for every two classes. According to the letter, the school will have reached that goal by late February.

Murdock’s letter also outlines how children can use their own iPads in school:

As promised in my letter dated November 26th regarding iPads at Neary, I am writing again to update you on the project. As you know, at that time we decided to implement an initial phase during which we will increase student access to school-owned iPads during the school day by acquiring more iPads for the school. I am happy to report that, as planned, we are now proceeding with the acquisition of enough additional iPads so that, beginning after February vacation, the 4th grade teacher teams will be able to share one set of iPads for every two classes.

As I explained in that letter, we are not asking parents to buy iPads for their children, and we plan to have our students use school-owned iPads. However, if a student has an iPad and parents would like to have him/her bring it in and use it at school in lieu of using a school-owned iPad, that would be fine, as long as both the student and his/her parent sign and agree to follow the district’s “Bring Your Own Technology” protocol. During the last two years, we have had some students using the district BYOT protocol to bring in devices for reading, and as we increase access to iPads for our 4th grade students we are happy to invite 4th grade parents who wish to do so to allow their child to use a personal iPad in school under the BYOT protocol. I am attaching a copy of the protocol for your convenience. If you wish to have your child use his/her own iPad at school, please complete and sign the protocol and return it to your child’s teacher. We will then provide you with the information regarding which apps you will need to install on the iPad for use in school.

Once again, thank you for all your feedback and all your continuing support. We are looking forward to implementing this phase of our project after February vacation.