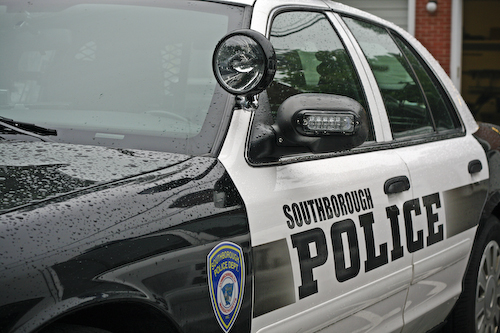 The police search for a suspected vandal drew a lot of attention this week.

After tires were slashed in Owen O’Leary’s parking lot Super Bowl night, witnesses described the suspect as a one legged, 6’8″, man with a southern accent.

The unique description caught the attention not only of the Southborough public but of media all around the region.

With that much attention for that identifiable a description, it was inevitable that someone would provide police with the tip they needed!

Today, the Southborough Police Department’s facebook page announced an arrest has been made. A Framingham man was arrested and charged with 7 felony counts of Malicious or Wanton Destruction of Property, Driving to Endanger, and Disorderly Conduct.

Framingham and Southborough Police took the suspect into custody at his home in Framingham on Tuesday night. He is due to be arraigned in Westborough District Court today (Wednesday).

Police thanked all those who assisted them through emails and calls regarding the case.