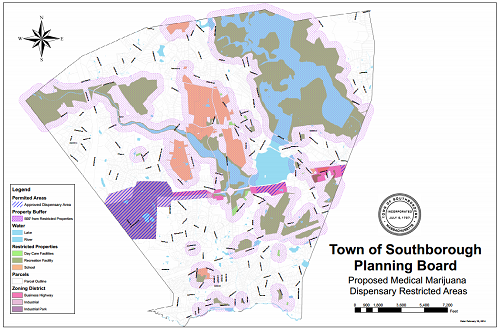 Above: This Planning Board map specifies the proposed zoning restrictions forMedical Marijuana dispensaries. (Click here for a better look)

Here are some updates on some of the controversial issues that have pending warrant articles for the Annual Town Meeting.

As I recently posted, a new compromise version of the zoning bylaw has been proposed. The materials have since been posted on the Planning Board’s website. The public hearing is scheduled to open Monday, February 24 at 7:00 pm. (Click here for agenda).

Former selectman David Parry alerted me that the state public hearing for this project has been scheduled Wednesday, April 16.  This is the the evening immediately following the second night of the Annual Town Meeting.

Recently, town officials worried that reassessing the project would rock the boat and jeopardize state funding.

While Parry is leading the citizen’s petitions to reassess the project, he is adamant that he is not out to kill the project and its state funding.

Parry asserts that that holding the hearing immediately after people hear about all of problems/concerns related to the project will be a disaster. He foresees disgruntled residents showing up to voice objections to the project.

Conversely, he claims that a committee can succeed on improving the project if it is given time to work through issues before the state hearing.

For more of Parry’s thoughts on this issue, you can read some of his comments under my previous post on the project.

Public hearings on Parry’s warrant articles are expected to be held by the Board of Selectmen prior to town meeting. No dates are posted yet.

Thursday night, the Open Space Preservation Commission will hold its first meeting since the Barn Hollow Open Space compromise was announced by the Planning Board. On the agenda is an update on this issue.

“I don’t know what the benefit to the town is,” Commission Chairwoman Meme Luttrell said of a proposal Planning Board member Paul Cimino relayed last week regarding controversial plots of land behind million-dollar homes in the Barn Hollow neighborhood. . .

Gillespie said she was dissapointed that an email she hoped would spark conversation was instead used as proof as to the commission’s involvement in the process.

In the referenced email, Gillespie had asked to meet with Selectman John Rooney to talk about the issue. In the email:

Gillespie laid out a proposal from her commission that the land be deeded not to the town, but to a homeowner’s association to be created by Barn Hollow residents.

It allowed the homeowners to keep mowing their land if Giblin agreed to give the town 1.5 acres of open land somewhere else.

On the date for the Main St hearing: interesting choice. I think rather than disgruntled citizens showing up, you will have folks too drained from two nights of Town Meeting to want to go out for another night of discussing town issues. Very smart scheduling on someone’s part.