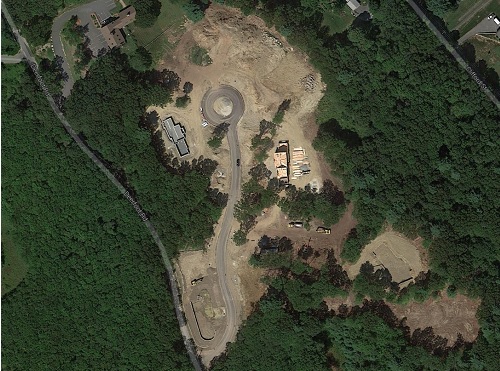 Above: The Open Space Preservation Commission voiced concerns about the treatment of land at the under development Deerfoot Estates. (Image from Google Maps)

I just can’t get to everything. So, it’s a good thing that The Metrowest Daily News has a reporter that covers some of the town meetings I miss.

MWDN reports on Open Space Commission’s concerns about a new development in construction. In another article, that same developer and commission are reported as still being in disagreement over Barn Hollow Open Space issues.

In happier news, there was public accord at this week’s installation ceremony for the new Southborough Police Chief. Chief Kenneth Paulhus thanked and embraced former chief candidate, Lieutenant Sean James.

Read about these stories below:

Members of the Open Space Preservation Commission Thursday said they believe the developer of the controversial Barn Hollow neighborhood might have encroached upon open land in . . . Deerfoot Estates, a cul-de-sac of eight homes being built by town developer Kevin Giblin.

During a lengthy discussion, commissioners raised concerns about Giblin’s treatment of “open” land – land on the property that, under the permit for the project, is supposed to be left in its natural state . . .

[Commissioner Frederica Gillespie] said the commission had asked to accompany Town Planner Jennifer Burney on a walk of the site, but that Giblin had refused to allow them on his property. . .

Burney said Friday that she has been out to the property several times to follow up on the complaints. She said it appears construction workers did drive over a small section of protected land, after which time Giblin installed markers that correctly marked the land’s bounds.

Burney said it was hard to tell whether the commission’s fears about trees being cut down were accurate. . .

“You’re a true law enforcement professional,” Paulhus said to James. “Our brief private discussion right after my interview meant more than you know.

“I hope to use our combined law enforcement experience of nearly 50 years to make our department the best it can be.”

The two men embraced after Paulhus’ speech, and James and many other officers stood and applauded the new chief at the end of the ceremony.  (read more)

Selectmen were unable to mediate a compromise between town officials and developer Kevin Giblin Tuesday, leaving in the air a resolution for the longstanding dispute over open land at his Barn Hollow subdivision.

“This is a challenging situation,” selectmen Chairman Daniel Kolenda said after about an hour of discussion. “Clearly a compromise is required, and not everybody is going to be happy with the outcome.” . . .

Tuesday night, Rooney noted the town’s Open Space Preservation Commission would be OK with receiving the original 1.5 acres. He asked Giblin whether he might be able to swap 1.5 acres, but Giblin said he couldn’t commit to doing so. . .

Giblin proposed an alternative solution. He said he would file plans with the Planning Board to modify the original approval for the subdivision in a way that would protect the homeowners’ interests.

Giblin said his engineer believes there is some leeway in town bylaw for the way the property has been used.

Planning Board Chairman Don Morris told selectmen that if Giblin files a proposal to modify his permit, they board would look at it “on its merits.”

Morris said if the subdivision was modified, that would fall under the authority of his board, not Town Meeting. (read more)