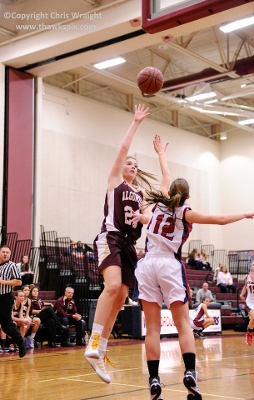 Right: ARHS’ Amanda Murphy shooting against Westborough earlier this season. According to MWDN, she simultaneously hit the 1,000 point milestone last night, and helped turn the game around, temporarily.  (Photo by Chris Wraight)

According to The Metrowest Daily News, the team seemed outmatched for much of the game, until:

Facing a 13-point deficit with 3:55 remaining in the third quarter, Algonquin senior Amanda Murphy released a high-arcing trey. Swish. It was her 11th point of the game, the number she needed to hit the illustrious 1,000-point milestone for her career. . .

The shot sent a shockwave through the Algonquin bench, and put the crowd into a frenzy, giving the Tomahawks the life they needed. From that point, Algonquin outscored Westford 25-18, bringing the T-hawks within three points with seven seconds remaining.

That set up LeBlond, who took a pass from Julia Insani just to the right of the key. With the clock winding down, LeBlond fought over traffic to release a miracle three that barely beat the buzzer to knot the game at 56-56, sending the teams to overtime.

“This is it,” said Jones. “The last couple of years I’ve been debating. I love coaching these kids. I love being around them. I just told them that other than my wife and my kids and my grandchildren, this has been the highlight of my life, coaching these kids.”

As for Murphy’s reaction to her milestone:

“Honestly I’ve only been on the team for three years so I wasn’t ever really expecting to get it,” said Murphy. “It’s a huge accomplishment and I’m happy to get it, it just stinks to get it in such a tough loss. We really wanted this game, but I think we gave everything that we possibly could and we played so hard until the end and I’m so proud of my team.”

If you missed my update to Monday’s sports post, you may not know ARHS still has one more team hoping for a state title.

The winter cheerleading squad, ranked 3rd in its division, will perform at state this Sunday, March 9. The competition is scheduled for 3:00 pm at Tantasqua Regional High School.