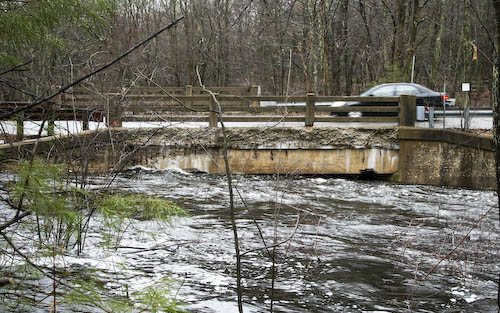 Above: The River Street bridge, shown here crossing a rain-swollen Sudbury River in 2010, will temporarily be narrowed to one lane. (Photo by Susan Fitzgerald)

Yesterday, the town announced that the Route 85 River Street bridge will be limited to one direction at a time starting this Monday, March 10. To accomodate the two way traffic, a temporary light will be in place.

The new restriction is estimated to occur through June.

The bridge by the Commuter Rail station has been under construction since early June 2012. At that time, the state thought they would be able to maintain two lanes of traffic through the project. In May 2012, Susan reported:

Back in 2010, the state said the bridge was structurally deficient and needed to be replaced. Construction is expected to take about two years, but the state says they will be able to maintain two lanes of traffic throughout the project. The bridge handles approximately 7,800 vehicles every day.

The new bridge will be wider than the existing one, with two 12-foot travel lanes, wider shoulders in both directions, and a sidewalk on the west side. The work is expected to cost more than $3.3M.