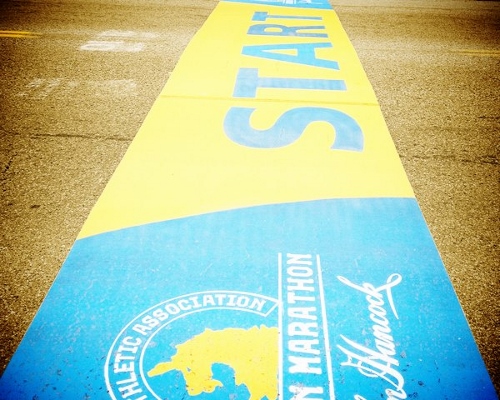 Above: Many of this year’s marathon runners are still trying to achieve their goal from last year, crossing the finish line. (Image from Boston Marathon Facebook page)

On Monday, April 21, thirty-five Southborough residents will don a bib a to run in this year’s Boston Marathon.

Some of them are runners who never got a chance to finish the challenge last year. Two of them shared their story with WBUR this week: Dick Chase and Leslie Hadden.

They were among a four local runners interviewed on WBUR. The interview is posted on their website under Turning Left on Boylson.  (To hear the interview with all four runners, click here.)

The snippets below are Dick’s and Leslie’s responses. They begin after other runners have explained that at the time they learned the finish line was closed, they didn’t know why:

How did you feel at that moment?

Leslie: Very frustrated, extremely disappointed and all I wanted to do was just get to the finish.

Dick: I first heard that something had happened about mile 22. I didn’t know what was happening, heard it actually from another runner whose son had called him. Then we noticed all the police gathering in clumps rather than being spread out on the route. But no one told us anything so we just kept running.

Finally about mile 23 they said, “We’re going to take you off on the next block,” and we just kept running. I also heard rumors that there was an alternate finish area, a top secret alternate finish area, that we could all go to and finish. So we kept going. And then finally just before mile 25 at the overpass to the [Mass] Pike, they stopped us. The road was blocked, and they said, “You have to go home.” I live in Southborough which is right next to Hopkinton. I just came from home. I had no desire to go back home. I have one direction I want to go in and that’s getting into downtown. . .

Was there ever any question in your minds about whether you’d run again this year? . . .

Dick: I still consider that I haven’t finished that race. I still consider this year’s race to be a continuation of last year’s race. So my time this year is going to be 8,909 hours, which gives me a good pace, my usual pace, it just happens there was a big break in between. I gotta take that right on Hereford, left on Boylston and finish what I started.  For me, that’s what running has always been. That’s what I think the Boston Marathon is all about: finishing what you start.

There was a certain amount of emotional impact for all of you from last year. How do you imagine that’s going to play on you this year, especially when you get close to the finish line?

Leslie: I hope that I’m prepared to deal with the finish. I, I think I will be.

You mean at the finish line?

Leslie: I know some are talking about being there, which is absolutely incredible, and I commend them for that, but I think that’s going to be extremely overwhelming for me to see that.

Though I don’t need to do so this year because of the BAA invite, I’m still running for the American Liver Foundation. I started running for them after successfully completing treatment for Hepatitis C several years ago – 42 weeks of yuck for a 50/50 chance of success at the time. Francie and I have taken turns running for them every year for the past six years, and today new medicines and protocols have the success rate up to 80%! If you have the resources and inclination to help out, you can make a donation at http://go.liverfoundation.org/goto/dcmarathon.