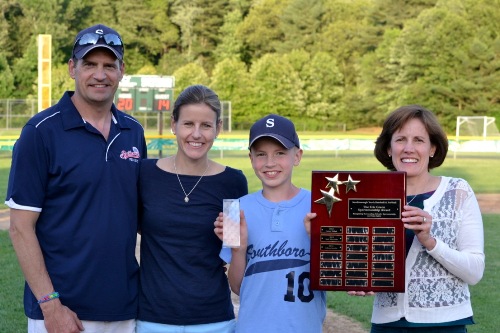 Eric Green strived to do his personal best each day, according to his mother, Suzy. She addressed the 100 people gathered for the 3rd annual Eric Green Sportsmanship Award ceremony on Sunday, June 15.

Eric would volunteer to read the Little League Pledge before each game which states, “I trust in God. I love my country and will respect its laws. I will play fair and strive to win; But win or lose, I will always do my best.”

Always doing one’s person best is a message that is embodied in the awards. The awards are in memory of Eric, who passed away at the age of 12 from an undiagnosed  heart condition in January of 2012.

The honor is awarded to a 12 year old player each season.

“The award is based on qualities exhibited by Green during his baseball career and throughout his life – not to be equated to baseball skills, but rather good sportsmanship, perseverance and one’s overall commitment to their team and friends,” explains Jim McCarthy, Southborough Little League director.

Winners names are inscribed on a memorial plaque at Trottier Midddle School and updated annually. Recipients receive a commemorative award with the inscription “Recognizing Outstanding Attitude, Sportsmanship and Team Spirit.”

Below: All photos contributed by Jim McCarthy

Suzy Green, describing the kind of person her son was at the 3rd Annual Eric Green Sportsmanship Awards

Beth,
In my haste to get the pictures to you in a timely manner, I neglected to include the other 2014 nominees:

These boys have equally impressive character and commitment to do their best. Congratulations to them for being nominated! My apologies for the oversight.
Jim McCarthy