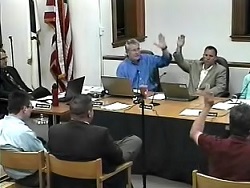 Left: Selectmen Bill Boland and Dan Kolenda, with Planning Board member Don Morris, voting as onlooking Planning Board candidates learn their fate is yet to be determined.  (Image from Southborough Access Media video)

At Tuesday’s Board of Selectmen Meeting, the Board was scheduled to appoint a new member to the Planning Board. They were also slated to reappoint a member of the Zoning board of Appeals. Neither of those appointments occurred.

The ZBA is now seeking new applicants to replace member Edward Estella. Estella’s decision to step down came at the last minute.

ZBA Chair Leo Bartolini stated that Estella had told him “up until the other day” that he planned to stay on. Estella is now only willing to serve through June.

On July 15th, the BOS plans to evaluate applications. Bartolini believed that both alternate members Lisa Cappello and Paul Drepanos will vie for the spot.

BOS Chair Bill Boland said they should notify the public that they are seeking applicants. He wanted to consider other applicants. And if either alternate is moved up, that spot will need to be filled.

The ZBA is currently in the midst of hearings on the controversial, proposed 40B project at Park Central. Estella recused himself from those hearings this spring, leading to some controversy over purported pressure by the developer. At a recent ZBA meeting, another member indicated he may need to recuse himself as well.

In May, Cumberland Farms sent a representative to the ZBA to object to the developer’s proposed traffic plan. Member Thomas Bhistikul informed the board that his law firm represents Cumberland Farms. He noted that if they were becoming a player, he may recuse himself. At that meeting, Bartolini advised Bhistikul to complete a conflict of interest report for the town.

For an application, to fill the ZBA vacancy (or a position on any other town board), click here.

Tie on Planning Board appointment

For the first time in a joint vote of the boards, selectmen outnumbered Planning Board members.

Two candidates were before the boards to fill the position vacated by now-Selectman Paul Cimino.

Andrew Dennington and Jesse Stein made their cases. (For their application, see the agenda packet.) Each swayed four of the eight voting members present.

Unable to agree, the boards chose to revisit the vote on July 15th.

Planning Board Member Andrew Mills was absent due to a schedule conflict. Stein’s application listed Mills as a reference. In addition to serving on the Conservation Preservation Commission together, they are neighbors and friends.

Selectman John Rooney questioned if Mills will need to recuse himself because of the friendship. Planning Board Chair Don Morris argued that decision would be up to Mills to decide. If he felt he could make an objective decision, he should be allowed to vote.

Selectman Bonnie Phaneuf didn’t take issue with the friendship. She did have concerns with the fact that they are neighbors. While she didn’t believe it should stop Mills from voting, it swayed her vote against Stein.

Phaneuf pointed out that it was possible for both Mills and Stein to need to recuse themselves on a project near both their homes. In addition, she pointed out that another member lives on a connected street. She argued that it makes sense to have a representative from another area of town.

The July 15th meeting hasn’t been posted yet. You can expect it to take place in the Town House Hearing Room that evening.

Updated (6/22/14 3:20 pm) Originally, I incorrectly wrote: “Also planned for that agenda is adoption of the final report of the Main Street Working Group. It will then be submitted to massDOT as the board’s comments on the project.” That is actually expected to take place this week. Again, no agenda posted yet.

“The July 15th meeting hasn’t been posted yet. You can expect it to take place in the Town House Hearing Room that evening.”

“Also planned for that agenda is adoption of the final report of the Main Street Working Group. It will then be submitted to massDOT as the board’s comments on the project.”

Isn’t that report with recommendations for changes supposed to be submitted within 10 days of the public hearing which was June 18th?
My interpretation is that the BOS unanimously, loudly and with high praise accepted the report. We should not take any chances that the deadline for submission of said report will be at risk. Just submit NOW

You are right. That is my mistake which I need to correct. I remembered that it was on agenda for next meeting. That meeting will be sometime this week. I need to post an update to reflect that!

(This is why newspapers have editors! A second pair of eyes to correct mistakes. For me, that’s vigilant readers.)