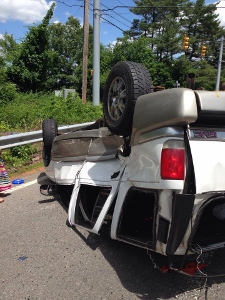 Right: Southborough Fire Department writes that a crash and rollover on Route 9 yesterday resulted in “non-life threatening injuries” (Photo from their Facebook page)

Southborough Wicked Local is reporting on an accident that took place on Route 9 in Southborough yesterday.

Witnesses report that a rollover occured when a driver ran the red light at White Bagely Road and hit another car:

Four people were transported to UMass Memorial Medical Center in Worcester with non-life threatening injuries at midday Thursday after an SUV collided with another car and rolled over on Rte. 9 near White Bagley Road, police said.

Although the cause of the 1 p.m. crash is under investigation, Southborough Police Lt. Sean James said several eyewitnesses at the scene told police that a white GMC Jimmy SUV was traveling west on Rte. 9 when it ran a red light at the intersection of Rte. 9 and White Bagley Road, hit a Toyota Scion, rolled over and landed on its roof. . .

When police and firefighters arrived, one person was partially trapped inside the SUV, but was conscious and alert, said Southborough Fire Lt. Christian Dano.

“We were able to get her out, no problem,” he said.

Three other passengers in the Toyota were reported as injured. No specifics were released, but all injuries were classified as non-life threatening.

SWL shared accounts from good samaritans at the scene:

Lenny Hutt of Westborough and Dave Myers of Franklin heard the crash while they were having coffee outside Starbucks on Rte. 9. They immediately called 911. . .

Hutt, an ex-EMT, Myers and several other bystanders aided the injured passengers at the scene as they waited for police and firefighters to arrive.

“I stayed with one girl who had injuries,” said Hutt. “She was in quite a bit of pain. I prayed with her.”

The bystanders told SWL that Southborough Police and Fire Departments responded quickly. Southborough Fire Department posted to Facebook that they received help from Westborough and Ashland in clearing the scene. Patients were transported to Worcester hospitals.

Many of us that work in the area of this accident heard it happen and ran to the scene. As we watched Mr Hutt, Mr. Myers and many others jump into action controlling the entire scene before the police got there was so touching. One gentleman directed traffic, two went to the SUV and assisted the poor woman in getting out of the car and cared for her until the ambulance arrived. All of us were so impressed at the amount of caring, empathy and humanity that we saw yesterday. Kudos to all of those people that ran help.

And just think firefighters and police officers do that everyday.