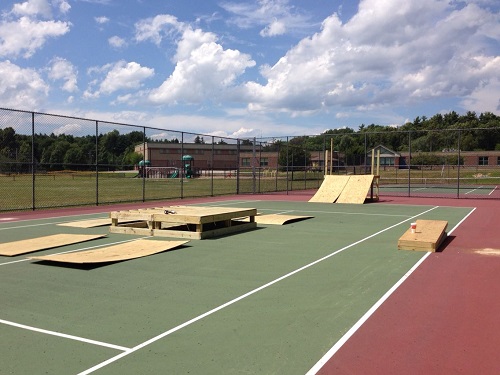 Above: After years of lobbying for a skateboard park, the Southborough Recreation hopes to complete a wooden skate park on the Finn School tennis courts by the end of July (Photos by Alyssa Borelli).

After a series of Southborough Recreation efforts to build a skate park for the town’s growing number of skateboard enthusiasts, the committee is now seeing its hard-earned efforts come into fruition.

A wooden skate park, complete with ramps, boxes and rails at the Finn School tennis court is expected to be completed by the end of this month.

The tennis courts at Finn were chosen since they are not widely used,  according to Ferguson.  She explained that the commission decided to built the skate park out of wood based on cost and that

if needed, it could be moved and it also reduces sound (compared to metal).  Additionally, if the Recreation Commission chooses to convert back to a tennis court they can easily do so by relocating the skate units elsewhere and resurface the court.

Builder Bill Giordano said, “[the commission] picked a perfect place because it’s smooth; there’s no need to resurface the tennis courts.” He will be putting in Skatelight, a ramp surface on the wood fixtures next week. Almost half of it’s completed right now, according to Giordano. 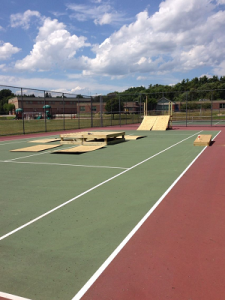 In June 2009, more than 20 Southborough children, teens and their parents attended a selectman meeting to lobby for a skate park. Selectman approved, but recommended the Skate Park Committee to look into other locations. Ever since then, the project has been put on the back burner. Ferguson cited the depressed economy and options of where to build the park, as cause for delay in construction.

The Skateboard Park Committee originally planned on building a concrete park where the volleyball court was at Woodward School (Choate Field). Other locations included a town-owned empty lot across from Fay Field on Central Street in Fayville, which was rejected by Selectman.

Southborough Recreation plans to offer clinics and bring back its popular after school skate boarding programs in the fall. Exact days and times have not been determined.

Ferguson said, “We hope that Southborough skaters will enjoy the new facility which they have waited so long for.”

Is there an alternate place to place tennis now?

I know that Neary has tennis courts that my family sometimes uses. On the Rec website, under facility it lists courts at Fay School. I don’t know if there are restrictions for the use.

I just noticed on the Rec Department website that Fay Court isn’t for public use.

Finn School has two tennis courts. The skate park will only take up one court, while the one adjacent to it will still be open for use.

I should add that the department posted the following info on its home page for tennis players (which includes how to use St. Mark’s courts):

The Richardson courts located at Neary School are scheduled for lessons as follows:
M-F 9:30 – 11:30 and T & Th 6:30pm – 8:30pm
(please call to confirm if evening classes will be held-if class doesn’t fill then the court will be available)

Finn School one court available all the time

Fay Courts – not available to public

St. Marks – Due to vandalism St. Marks will issue a key to anyone in Town that wishes to use the courts. You need to see the receptionist and leave an ID.