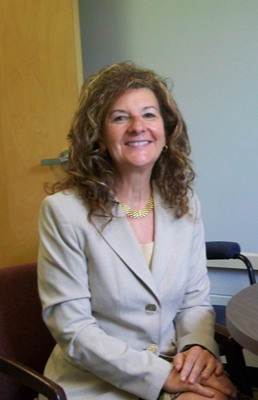 Christine Johnson is the new superintendent for the Northborough-Southborough school district. I got a chance to sit down with her to find out how she feels about her new role.

Johnson tells me she has never felt more proud to work for the district.

As a former teacher and administrator at Algonquin, she would often be asked what district she works for, and can’t recall the number of times people would say, “Wow – you’re so fortune.”

That feeling of pride has stuck with Johnson then, and continues today.

“Ten schools, three districts, one community” is the districts shared mantra. Working collaboratively is a challenge, but also the most rewarding.

There’s a lot we can individually, but far more can be done when we work collaboratively.

As one of the leading regional school districts in the state, Johnson cannot name just one factor that leads to its success – there’s an entire list: community members, parents, town boards, technology, administrators, faculty, staff, and much more.

In the end, everyone is here for the same reason – and that’s our students, that’s what’s most important.

We’re in a good place, we have an excellent road map and vision in mind of where we want to go. In education, your destination point continues to move the closer you get. We will continue to refine and revise. Growth is an on-going process.

Many initiatives have taken place over the past three years, which Johnson plans to continue, such as curriculum mapping, a focus on mathematics on a k-8 level, and refining literacy programs. One aspect that’s been proven a success is the district’s powerful educator evaluation tool.

It’s worked well because the evidence is clear: teachers stay in the district, are committed to the excellence of every child, and have a well-rounded perspective of each child’s potential.

As for managing state mandates:

The challenge is to recognize the changes we are being told to embrace, and identify what aspects we need to change in order to embrace [them]. Some of the things [we are asked to adopt are things] we already have in place

As previously announced, testing for this year will continue to be MCAS until 2018, unless the state says otherwise. Johnson explained,

For our district, this was the right decision . . . because we know what the PARCC test looks like, we know what the expectations are [and] we’re still preparing our student in a way that they will be successful.

Johnson tells me she welcomes hearing from the community through emails, phone calls, or stopping-by her office.

She’s also currently working on venturing onto Twitter. It’s a tool she expects high school students to appreciate, especially when school is cancelled.

As the former assistant superintendent, she is familiar with the “snow day” process.

I’ve learned there’s quite a network of superintendents that are up at 4 a.m. deciding whether to cancel school . . . we’re up and early talking with safety officials in both towns, listening to their suggestions and thoughts on road conditions; we’re listening to what other school districts are saying in other areas . . . I hope that folks will appreciate the decision we make with the information we have at 4 a.m. or sooner or later.