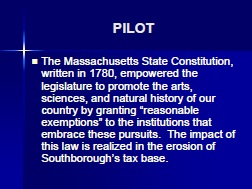 Last week, chatter in blog comments referred to what some see as insufficient PILOT contributions by the private schools in town.

For some residents, it’s a long standing gripe that a large chunk of Southborough land is owned by tax-exempt institutions.

It’s the reason that the town annually pursues Payment in Lieu of Taxes (PILOT) from non-profit institutions in town.

Selectman John Rooney saw the recent comments. He asked me to share with readers his 2011 presentation on the issue.

The “PILOT Update” laid out the tax burden for each institution vs their PILOT contributions. The presentation (available here in pdf form) was part of Rooney’s campaign to increase contributions that year.

According to Rooney, the figures have changed but he believes “ratios are consistent”.

You can read Susan’s coverage of that campaign here.

The degree of our subsidy to St. Marks and Fay varies depending on how you look at it. On a net subsidy (Cost of services – Pilot) basis gap is about $250,000. On a Cost to the Taxpayers basis (Total Exemption – Pilot) the number is closer to $550,000.

Either measure is valid. The first measures the value of the services that the 2 institutions get in excess of their payments. The second is the depth to which taxpayers in our community have to dig into their own pockets to make up for the exempted revenue. It is some where between $75 and $150 per household on average.

Looked at another way, the costs imposed on us by these institutions could pay for 3-5 teachers or firefighters or police officers. It could partially or fully cover the cost of acquiring the Garfield House. It could cover a significant part of the debt associated with a public safety building.

The painful fact is that these institutions pay the same and 1-5 homes in our community.

The next time a representative from one of these institutions pontificates on their long and happy association with our community and how they are a vital part of it, remember, instead of us thanking them for their contribution, they should be thanking you for your subsidy.

You really cannot consider yourself a full part of a community unless you are carrying your fair share of the load.

A flip side to the coin described by Al above: If those institutions weren’t there and instead their properties were covered with more of the standard 4 bedroom, 2.5 baths, 2 car garage homes that have covered every other parcel, the tax revenues from those homes would also not off-set the town services they receive. Those homes, each with their two or three kids in the public schools always generate less tax revenue than is spent on them, and we’d have more or larger schools, maybe have more traffic on the roads, more waste in the landfill, etc etc…
I had never considered this point of view til I heard it presented by a member of Advisory at a TM a few years ago… acknowledging my source as best I can…
Besides adding some class to the center of town, these institutions may actually be costing us less than the alternative!

That is all well and good southsider but it is no justification subsidising tuition to two very well endowed institutions. They are making money off our generosity. It is that straightforward. They have the money to change the facts overnight. Pretty simple thing to do and it would also be the right thing to do.

It is certainly a point of view.

On the whole, residences are money losers for the town. But consider, we are talking about the crossroads of the town. Some of that space could easily be commercial or retail. With a restaurant or two and some shops/offices it would be a wash.

Nothing is going to change but we should call the subsidy what it is.

What is missing in the debate is that the town is also spending money to educate the children that live in these home that do not attend Fay or St Marks. Some could call it school choice.

Then let’s also throw in two-thirds of the property taxes being paid by the parents of the 80-some Southborough children that attend Fay instead of K-8 public. Then add to that the same portion of the property taxes being paid by the Southborough families whose children go to St. Mark’s. The lion’s share of ALL of our property taxes go to support the schools so in the trade off between the handful of faculty kids attending public and the town kids attending private, I believe you will find that the town comes out ahead for once. However, I do agree with the sentiment behind your argument. I would also like to see both schools step up their PILOT payments to the town significantly and I hope that money goes directly to the town and not into an effort to purchase a ladder truck or the Garfield House or whatever the next cause of the moment may be.

Let’s examine the claim that if the 2 schools did not exist the area would be covered with houses and we would no better off:

1. What is the net deficit of a home. About 20% of the $36 million we raise from property taxes comes from commercial and industrial property or $7.2 million. Roughly 1/3 of our budget is for services like police, fire, roads which benefit both commercial and residential properties. The other roughly 2/3 goes to schools which do not really provide services to commercial property owners. So, the total “subsidy” from commercial property to residential is about 2/3 of $7.2 million or about $4.8 million. There are about 3500 residences in Southborough so the average subsidy is about $1,375 per house. If we build a new house we need to find $1,375 in commercial or industrial revenue or our taxes go up.

2. If you look at the tax exempted areas I believe that under our subdivision rules a reasonable estimate is that 50 homes might be built. If that is reasonable then if the properties were fully built out with homes the rest of us would have to raise an additional roughly $70,000 to cover the full cost of the town services. If it was a mixed development (and the area is ideal for this) the tax impact could be much closer to $0.

If you believe my estimate of a net subsidy on the order of $250,000 to $550,000 to the two schools the the claim that we would be no better off if the area was covered with homes does not appear to bear close scrutiny.

Amen Southsider (can I say ‘Amen’ or are we going after Pilgrim Church next?) We play on their fields, skate on their rink, swim in their pool, and run in their gym. Much rather have the schools than retail or houses. Also, without the schools, downtown businesses would see significant drops in sales. But add a strip mall or an office park or a handful of houses. Brilliant.

Amen is still OK, but watch out for the words “under God” in this state.

Let’s see now, my bet is that the members (most) of Pilgrim Church have houses in town and therefore pay property taxes. I would also be willing to bet those same members contribute money for the church’s operation and volunteer time to make sure it all works.

Educational nonprofits and religious nonprofits comparisons are like comparing apples and oranges.

I am sure many disagree with me and like minded people. I have no expectation that this situation with Fay and St Mark’s will change anytime soon, but one can always hope.

Yes, there is some [limited] resource sharing between the private schools and the town, and I suppose we might factor that into Al’s approximate subsidy calculation, above, though I don’t think it will move the number appreciably.

And let’s be honest–does anyone think either Fay School or St. Mark’s will pull up stakes and convert their holdings to strip malls? That isn’t what this discussion is about–it’s about a fair acknowledgement of the financial relationship between the town and the two major private schools. It was not good to see the schools buy up several houses over the past years, and promptly take them off the tax rolls. Then use those houses to attract faculty who might well enroll their kids in the public schools! All the while increasing their significant endowments.

But this is all old news, I fear, and like Frank Crowell, I don’t think the situation will change any time soon.

Both St Mark’s and Fay provide faculty housing. Would it not be fair to assess the value of the residential assets of each school and ask for real estate tax payments on those values? St Mark’s and Fay school certainly have plenty of private resources.

On another note, NECCA charges students families a huge amount for attendance of which a lot of the money comes form state funding and other school district placements……so NECCA is giving our money back to us. I would rather they kept the money and lowered their costs for those struggling to attend. The Executive Director makes close to a half million dollars. I know they do good work over there but much of that money comes form you and me…

NECC is buying up homes for their international students on Pleasant Street which is no longer pleasant with noisy weekends and unsafe, increases of traffic. On a poorly kept up road. The school maintains that it is up to the town to monitor speed limits and replace the road. Do they pay taxes on the homes they buy, while other homes in the area are going down in value. I have heard they do receive a good mount of foreign money and the international students in the houses they buy probably pay a pretty penny to spend one year as an intern. If I am wrong please let me know. As an aunt of a child with autism,plus other limitations, I am glad she is on a safe campus with steady staffing. That’s just one person’s opinion as I know how great these schools can be.

It seems odd that NECC ties into the Framingham water system, instead of having a septic as everyone else in Southborough does. This is quite a perk. Will they also be tying the neighborhood homes in Fayville, into their Framingham water lines, as they buy them up? And is there some way Mr Rooney can get them to help with the restoration of Pleasant Street and other affected streets, and to monitor the speed and number of cars from NECC closely. St Marks and Fay are not the only private schools in town This would help as part of a Pilot program. Or have them exit on to Route 9 during their busiest times. Or have a police-car pull over some of the many speeders, that may slow them down. And the town will increase its revenue. I know this area is not as harmed as other areas in town by traffic, but school kids have to walk through all that traffic to catch the bus.