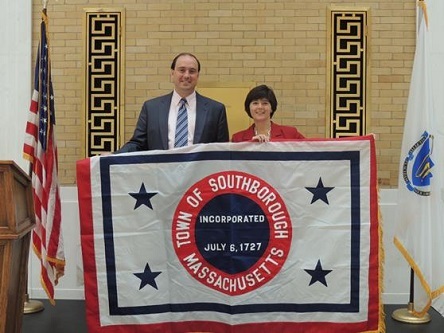 Above: Representative Dykema and senator Eldridge present a new Southborough town flag to be displayed in the Great Hall of the State House. (Photo contributed by the Office of Representative Carolyn Dykema)

Here’s a roundup of what our representative and senator have been up to lately: A water leak in the State House damaged the town’s previous flag. Representative Dykema and senator Eldridge presented a new one to be displayed in the Great Hall of the State House. This spring, three Southborough students were honored for their writing.

If you would like to know what else they have been up to on our behalf, here are the headlines from the press releases we’ve been stock piling:

Scroll down for excerpt from each story, and link to full press release.

“This bill takes necessary steps to improve public housing in communities around the state while addressing transparency and accountability at the local level,” said Senator Jamie Eldridge. (read more)

After the previous flag was damaged due to a water leak in the Great Hall in the State House, Senator James Eldridge (L) and Representative Carolyn Dykema (R) were proud to display the new Southborough town flag on July 17th.

A flag from every town in Massachusetts is showcased in the Great Hall of the State House. Southborough’s new flag will be added to this display shortly.

“This bill takes necessary steps to improve public housing in communities around the state while addressing transparency and accountability at the local level,” said the Senate Chair of the Joint Committee on Housing, Sen. Jamie Eldridge. (read more)

“The passage of this bill represents a step forward in conservation efforts for the Commonwealth,” said Representative Carolyn Dykema. “The protection of our environment and natural resources is vital to the success of our communities both now and in the future,” . . . Included in this bill is the authorization of $1 million for repairs and improvements to the Lake Maspenock dam in Hopkinton. (read more)

On Monday June 9th, Representative Carolyn Dykema  hosted a discussion for parents about teenage substance abuse in the Robert H. Adams Middle School Auditorium at 7 p.m. “There are some very dangerous and deadly drugs on the streets, even in Holliston,” Representative Dykema stated. (read more)

Southborough residents Maya Polackal, Sean Pierson, and Alisha Faherty were honored by Letters About Literature, a national reading and writing project from the Library of Congress that is run by the Massachusetts Center for the Book. (read more)

“The 34th Annual Senior Conference, held on Thursday, April 24th at Hudson High School was a great success, with a turnout of over 400 seniors from each of the fourteen communities in the Middlesex and Worcester district. I want to thank all of the seniors who attended this year’s conference, giving me a chance to learn more about their concerns and how state government can better serve them,” said senator Eldridge. (read more)

More attention needs to be paid to the waste and fraud in public housing. Money that should be used to revitalize those communities.

A water leak in the Great Hall in the State House would be the least of our worries on Beacon Hill.

Could we get an update from either one on the more meaty topics of the day?

If the gas tax referendum passes, will they both pledge not to support any legislation that undercuts the people’s will? If not, why not?

If memory serves me well, one of our award winning school committee members pointed out that we are not getting our full subsidy for buses. This was pointed out during the May election process (I am sure someone will correct me if this is wrong). What have either of them done to fix this issue?