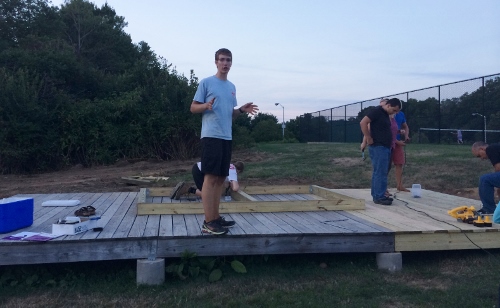 Above: Erick Kerstens explains his Eagle Scout project to expand the community outdoor concert stage and add a screen for movies. (Photo by Beth Melo)

Last night, volunteers were hard at work expanding the outdoor platform on Neary School grounds. The stage is used by bands performing at the Summer Concert Series and Southborough Summer Nights.

Erick Kerstens is managing the work as an Eagle Scout project.

The town scout’s core concept was to build an outdoor movie screen. Like the stage, it has expanded.

When Kerstens began talking out the project, questions came up, like where would the screen be stored when not in use. That led to the idea of a shed behind the stage, with one wall used for the screen.

The shed will also be used by the Recreation Department to store equipment used at the site. (One example is the generator used for power during concerts.)

He also learned that the small restrictive stage has been an issue for some bands. Thus the expansion. Weather permitting, Bluegrass Valley Band will be the first band to use the expanded platform tonight.

The shed will be moved in soon. And the project should be completed within a few weeks. Southborough Recreation Department hopes to use the screen next summer for a  backyard movie series.